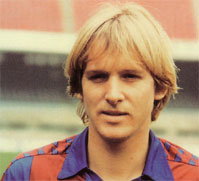 Midfielder of exceptional quality, Schuster (Augsburgo, Germany, 1959) was the driving force of Barça throughout nearly all of the eighties.

He had outstanding football skills, but he also stood out for his physical strength, his exceptional dribbling and the power of his goal shooting. However his difficult character caused him many problems. 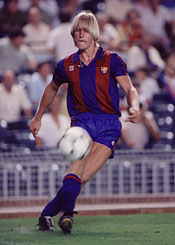 In 1981 he was seriously injured because of a severe tackle by Athletic de Bilbao defense Andoni Goikoetxea. However his recovery was complete and he formed a superb foreign partnership with Armando Maradona despite not achieving all the honours they had hoped for. It was in the winning League 1984/1985 however, after the Argentinian had already left Camp Nou that the best of Schuster could be seen.

He led the team, was in charge and shot penalties and fouls with great skill. He also encouraged his team members when things were not going well enough.

Unfortunately, in later years, relationships with the board of management started to deteriorate and he was on the sidelines during the season 1986-1987. Despite everything all the Barcelona fans remember him as a player of exceptional quality.