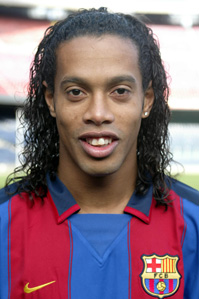 The Brazilian striker was born at Porto Alegre (Brazil) in 1980. In his five seasons at the club he became one its greatest ever footballers and made a decisive contribution to winning two League titles and the Champions League.

Ronaldinho came to Barcelona in the summer of 2003 to head the new club project which began with Frank Rijkaard as manager. The man who was to wear the number 10 shirt for Barça for five seasons immediately thrilled fans with his imaginative play which led to moves that very few footballers could aspire to. 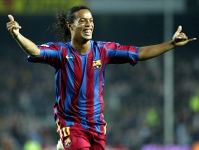 During his time at Barça he scored 94 goals in competitive matches even though he also stood out as a passer of the ball. With him leading the team on the pitch, Barça experienced some of the best times in its history, winning two back-to-back League titles and above all the Champions League in an unforgettable final on 17 May 2006 in Paris. Also memorable was the standing ovation he received at Santiago Bernabéu after scoring two magnificent goals in the 3-0 win against Real Madrid on 19 November 2005.