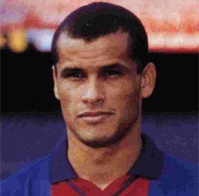 Rivaldo (Recife, Brazil, 1972) was signed from Deportivo la Coruńa at the start of the 1997-98 season as a direct replacement for his compatriot Ronaldo, who had left for Inter Milan after an exceptional year in Catalonia. 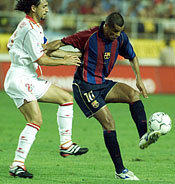 And Rivaldo was able to fill the role. A tall, sturdy player, he had the kind of abilities that had rarely been seen before, with tricky dribbling skills, a powerful shot and an amazing talent for converting free kicks and penalties, all off his left foot.

He was not an out and out striker, but more of a left winger or attacking midfielder, but still managed to rack up an incredible tally of goals in his time at Barça: 136 in 253 games. He was a serious and discrete footballer, who preferred to do his talking on the pitch and was rewarded in style for his achievements with the Balon d’Or in 1999.