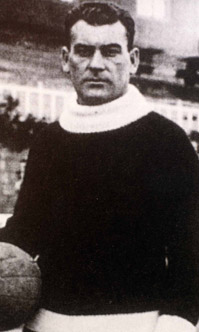 Platko (Budapest, Hungary, 1898 – Santiago, Chile, 1983) was signed in 1923 as the replacement for another legendary Barça stopper, Ricardo Zamora.

And he did so brilliantly, thanks to his wonderful talents between the posts, with his famous runs out of the box in tricky situations, and the amazing sense of security he inspired in his colleagues. He was one of the most important players in the Barça of the Golden Era.

In 1928 Cadiz poet Rafael Alberti immortalised him in an emotional poem about his heroics in the final of the Spanish Championship, in which he took a nasty knock in the head but stayed on regardless. Alberti wrote such lyrical words as “flaming tiger on the grass of another land”, “heroic blue and red” and “blond bear of blood”.