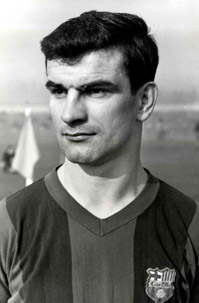 Known as ‘Golden Head’ due to his amazing abilities in the air, Kocsis (Budapest, Hungary, 1929 – Barcelona, 1979) escaped from Hungary in 1956 following the Soviet intervention in his country, when he was already an established star of his time.

Barça signed him two years later, along with his compatriot Zoltan Czibor, when they were playing for Swiss club Young Fellows. The Hungarian striker was a tried and tested goalscorer at all levels.

Apart from his terrific head, he also had a rifling shot with either foot and was an adept dribbler. He was also an intelligent player with an excellent ability to read the play. And he was a noted gentleman, and was admired wherever he went for his noble attitude to the sport.

He steered Barça to many wins, but suffered major disappointment when losing the European Cup Final in 1961 in Berne, the same place where seven years earlier his Hungarian national side had lost the 1956 World Cup Final to Germany.