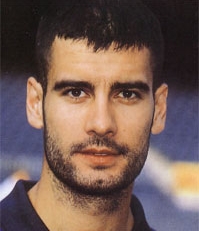 'Pep' Guardiola was one of the best players ever to emerge from the Barça youth system.

He was born in 1971 in Santpedor (Barcelona), and after representing the club at every level, he eventually made his first team debut for FC Barcelona in the 1990-1991 season. 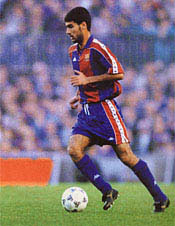 He was an exquisitely talented midfielder with excellent vision, and was the central playmaker in the side, always donning the famous number ‘4’ on his back. His brilliant career coincided with one of the most brilliant periods in recent club history, the so-called Dream Team under the great Johan Cruyff, with many describing Guardiola as the Dutchman’s natural prolongation onto the field of play.

Guardiola shared the dressing room with some of the greatest players in the world in the 1990s: Romario, Laudrup, Bakero, Zubizarreta, Stoichkov, Koeman, Amor, Figo, Ronaldo, Rivaldo, and Luis Enrique, among so many others. The downside of his illustrious career was a serious injury in the 1997-98 season, which kept him sidelined for a year.

He stayed at Barça until the 2000-01 season, when he decided to try his luck elsewhere at Italian club Brescia. His greatest achievement at international level was the gold medal at the Barcelona Olympics in 1992.

Barça B manager during the 2007-08 season, from June, first team manager.