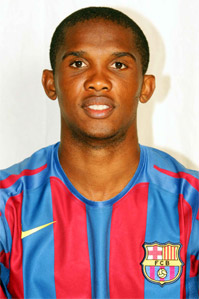 Etoío goes down in BarÁa history as ìthe indomitable lionî, the forward who never gave up. For 5 years he was the teamís target man, and the host of titles won were, to a massive extent, thanks to the crucial goals he scored.

He was on target in both the Champions League finals of Paris 2006 and Rome 2009.

Eto’o (Nkon, Cameroon, 1981) signed for BarÁa in August 2004 from Mallorca after a long tug of war with Real Madrid, who held the rights to the player. It was not long before it became evident just what an astute buy he was, as he became a nightmare for opposing goalkeepers. A fighter until the end, and a man for whom goalscoring was an art that ran in his blood.

Thanks to assists from the likes of Deco, Ronaldinho, Iniesta, Xavi and Messi, the African scored 152 goals in his 232 games in a BarÁa jersey. An astounding figure that makes him one of the most prolific strikers in club history. His 108 goals in 144 league outings make him the third highest league goalscorer on the club records, a tally only topped by CÈsar and Kubala.