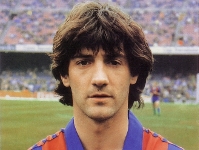 Bakero, the tireless midfielder from the Dream Team, was born in Goizueta (Navarra) in 1963. He will always be remembered for his crucial goal in Kaiserslautern in the 1991/92 European Cup.

He signed for BarÓa in 1988 from Real Sociedad, and was an attacking midfielder who gave everything for the team as he linked up with the forwards. His amazing ability to lose his marker and terrific heading also meant he contributed a number of important goals.

He immediately settled into the scheme of things under Johan Cruyff, showing excellent leadership skills and thanks to his versatility he soon became one of the most important members of the Dream Team, to the extent that many people described him as the heart and soul of the system.

There is no doubt that the most decisive goal of his career was the one on November 6, 1991 away to Kaiserslautern, in the second leg of the European Cup round of sixteen. With thirty seconds to go, BarÓa were losing 3-0 and on their way out of the competition. Koeman crossed and Bakero sent the ball flying into the back of the German net. Thanks to that goal, Barcelona continued on a journey that would eventually take them to the Wembley final and the club’s first ever European Cup title.

He left for Mexican club Veracruz early in the the 1996/97 season. His farewell match was against Real Valladolid and in his very last action in a Barcelona shirt, he scored a goal.

In 2000 and 2001 he returned to the club in a coaching role, where he was an assistant to managers Louis van Gaal and LlorenÓ Serra Ferrer.