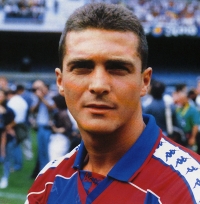 Amor (Benidorm, Alicante, 1967) was one of the most important players in the entire history of FC Barcelona, having made the third most club appearances behind only Migueli and Rexach.

He was brought up at La Masía from 1980, and on September 23, 1982, still as a youth player, he came on for Diego Maradona on the day that the Miniestadi was inaugurated. 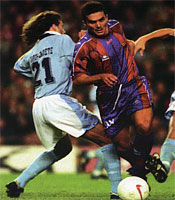 He is one of the players that best symbolises the Barça youth system, and his promotion to the first team came at the same time that the Dream Team was being put together. He developed into one of the engines of that side, playing as a centre half, and constantly putting in solid performances in a quiet but tremendously effective way. Guillermo Amor was, undoubtedly, the ideal paradigm for a locally produced player that was unconditionally committed to the Barça colours.

He was the FC Barcelona head of youth football from 2003 to 30th June 2007. In July 2010 he rejoined the Club as technical director of football training.