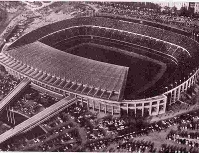 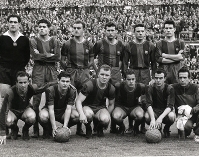 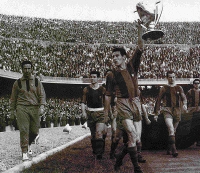 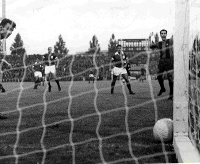 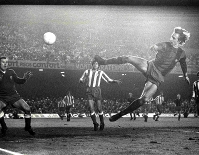 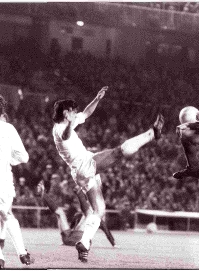 The club came of age with the construction of the Camp Nou stadium. It was an unprecedented project on an architectural level, as well as being extraordinarily ambitious on a financial scale.

But with the team going from strength to strength, there were plenty of reasons to justify the construction of a new home for the team. However, the earliest years of the stadium bore witness to one of the club’s most mediocre periods, with very little sporting success.

But the fan base was increasing regardless, in no small part due to the increasingly more important social significance attached to the club. This was made particularly clear when Narcís de Carreras became president in 1968, and coined a phrase that has gone on to become something of a club slogan, ‘More than a club’. FC Barcelona had become associated with some of the most fervently pro-Catalan and anti-Franco sentiments in Catalonia, and this contributed to making the club hugely influential in local society, bolstered by an increasingly closer relationship with the cultural world. After signing Dutch superstar Johan Cruyff, Barça went on to win the league title in 1973-1974, which happened to coincide with the club’s 75th anniversary, a moment that brought Barça fans closer than ever, despite the limitations that were still being imposed by the Franco regime.

The Camp Nou becomes the stage

In the late 1940s it started becoming patently obvious that despite being extended, Les Corts was simply not big enough for Barça, and the club started investigating the possibility of purchasing anew site. Francesc Miró-Sans, president from 1953, was one of the driving forces behind the project, and the Camp Nou was eventually inaugurated on September 24, 1957. The new stadium could hold 90,000 spectators, including 49,000 club members, and was the new stage for a team that was promising big things after winning the 1957 Cup final at Montjuďc.

The league championships in 1958-59 and 1959-60 and the Fairs Cup wins in 1957-1958 and 1959-60 were due in no small measure to the presence of legendary coach Helenio Herrera, who had a host of talented players at his command, including Kocsis, Czibor, Evaristo, Kubala, Eulogio Martínez, Suárez, Villaverde, Olivella, Gensana, Segarra, Grŕcia, Vergés and Tejada. But that veritable constellation of stars would not carry over into the sixties. The lost European Cup Final in Berne 1961 set the scene for a disappointing period in which the only major titles Barça won were the 1963 and 1968 Cups and one more Fairs Cup in 1966.

More than a club

But although successes on the pitch were few and far between, the club’s membership never stopped growing. One of the biggest attractions of following Barça was its increasing symbolism as being part of the kind of Catalonia that the Franco regime was so opposed to. Incoming president Narcís de Carreras made a famous reference to this in his acceptance speech in January 1968, when he proclaimed that “Barça is more than a club”. President Agustí Montal i Costa (1969-1977) took this a step further, doing his utmost to highlight the club’s Catalan identity, despite the limits imposed by the Franco dictatorship, and fighting for the cause of democracy in football, which led him into several high-profile confrontations with Franco’s sports authorities.

The signing of foreign players had been a controversial issue ever since the Di Stéfano affair in 1953. In the 1970s Barça suffered from the arbitrary nature of the sports authorities, such as in determining the status of foreigners with Spanish parents. But the go-ahead was finally given for Cruyff to join the club and he made his debut on October 28, 1973. The Dutchman made an immediate impact as Barça stormed to the league title. The most memorable night of all was an emphatic 5-0 win away to Real Madrid, Barça fielding a powerful attacking quintet of Rexach, Asensi, Cruyff, Sotil and Marcial. Cruyff was one of a new generation of players, a natural leader both on and off the pitch, and attracting massive media interest.

The club’s social identity hit its euphoric height when the 1973-74 league championship coincided with the 75th anniversary in Autumn 1974. With an avant-garde poster designed by painter Joan Miró, the celebrations were a very public demonstration of what Barça meant to the people at the time, involving the participation of artists, writers, singers and other figures representing the most dynamic aspects of Catalan society. It was on occasion of that anniversary that the song 'Cant del Barça' was recorded by the Sant Jordi Choir, and which has gone on to become the club’s official anthem.