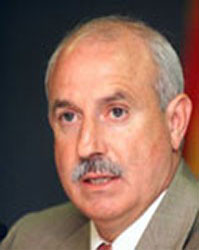 Llorenç Serra Ferrer, was born in Sa Pobla (Majorca) on 5th March 1953. He became manager of FC Barcelona in the summer of 2000 after Dutchman Louis van Gaal left the club.

In season 1993-94 he joined Real Betis and that season he took the Andalusia club to the first division. In the following season Betis finished third in the championship and won a place in the UEFA Cup and in season 96-97 they played in the final of the Kings Cup against Barca. This fantastic form in charge of Betis opened the door to our club where, after three years as the man in charge of the youth squads, he became first team manager.

During his managerial guidance the team were knocked out of the first league stage of the Champions League and went on to play in the UEFA Cup where Liverpool blocked the path to the final. On the 23rd of April 2001, after losing a league match against Osasuna, he was replaced on the bench by Carles Rexach and returned to the technical staff of the club. A year later Serrer Ferrer left the club.