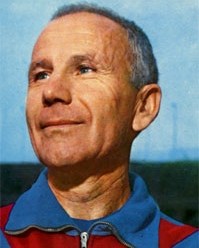 Salvador Artigas took over from Roque Olsen in the 1967-1968 season.

Previously, he had played for the blue-and-reds, even though he had spent the greater part of his career as a footballer with Real Sociedad. Soon after, he continued his career with Girondin of Bordeaux. After that, he signed up with Barcelona Football Club and in his first season took the team to runners-up in the League and won the Cup.

In his second season, they finished in the same spot in the League as well as playing in the European Cup Winners Cup final against Slovan of Bratislava, which the blue-and-reds ended up losing 2-3. In his third season with the Club, he resigned only five games into the League competition.