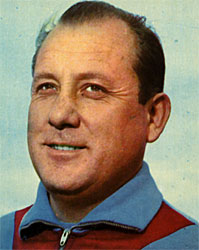 Olsen was a Real Madrid player, but he was forced to hang up his boots early due to a serious knee injury.

The season in which he took over the team was, in theory, a transitional period. Various players had to fit into the team; players who had been on loan, youngsters from the Barça youth squad - like Rexach, and other signings like Gallego (a great central defender), Muller or Reina.

His strong character and bad temper made him an unpopular manager with the players. After a defeat at the hands of Elche, he even went as far as dropping Vicente and Rey from the team because of their poor performances. Finally, in his first season as manager, the team ended up third in the League. Barça also won the Fairs Cup, beating Saragossa after a goal from Rexach - a player who, according to the very same Olsen, was not up to playing football.

The following season, 1966-67, proved to be a complete disaster and the Board decided to do something about it by signing a new manager: Salvador Artigas.