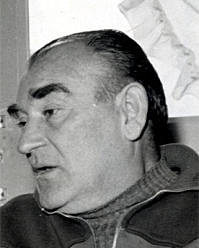 This ex-Barça goalkeeper became manager of the Blue-and-Reds when he took over from Jack Demby.

While he was running the team, Barça won the Campeonat de Catalunya in the 1934-35 season. The following year the club signed Patrick O'Connell to run the first team.

Four decades later, Barcelona Football Club again signed Platko. This time, however, he did not have a good season and he was definitively released from the club. His replacement on this occasion would be Domčnec Balmanya.