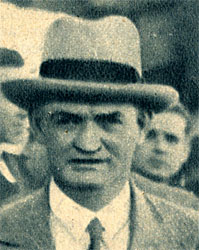 This charismatic Irish manager arrived at Barcelona Football Club in the 1934-35 season, after taking Betis to first place in the League Championship of the previous season.

The Civil War broke out when O'Connell was in charge of the team. The team, under O'Connel, then went on tour to the American continent.