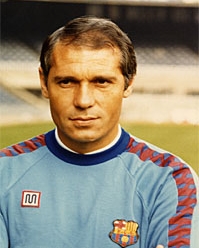 The sacking of Udo Lattek as first team manager led to José Luis Romero taking over on the manager's bench.

He was only in charge of the team on one occasion, against Salamanca in the Helmántico stadium (1-1). Later he managed other First Division teams such as Logrońés, Betis and Cadiz.