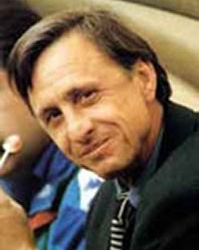 After having appeared for the club as a player, “El Flaco (The Skinny One)” returned to FC Barcelona for the 1988.89 season, this time to take up his new role as manager of the first team.

However, before returning to the Catalan capital, Cruyff had already built up plenty of experience as a trainer. He debuted on the Ajax bench, the other of the two clubs he had starred at as a player. He led the team to a Dutch Cup title in 1986, followed by Cup Winners Cup success a year later. In Holland, he was strongly praised for the attacking flair he imposed on his sides and also for his commendable work as talent spotter, discovering, for example Marco Van Basten and Dennis Bergkamp. 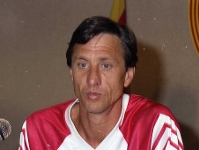 With Barça, Cruyff started work with a completely remodelled side after the previous season's scandal, known as the 'Hespereria Mutiny'. His second in command was Charly Rexach, who had already been at the Club for a year. Cruyff immediately had his Barça charges playing his attractive brand of football and the results did not take long in coming. But, this didn't just happen with the first team, the youth teams also displayed that same attacking style, something that made it easier for reserve players to make the switch to first team football. Without a doubt, such in-depth strengthening of the squad was one of the areas that best explains why Cruyff was such a huge success. 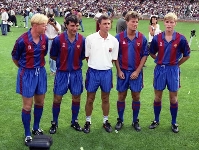 But the eight years that he was in charge of the club - he is the trainer who has spent the most consecutive seasons on the Blaugrana bench - did not come without their difficulties for Johan. It shouldn't be forgotten that on January 27, 1991, he was subjected to open heart surgery, which was directly related to his many years of tobacco consumption. The operation marked a moment of inflection. From then on, the team got better year after year, to the point that Barça finally claimed the much desired European Cup at the majestic Wembley Stadium. The team that one four consecutive leagues came to be known as the 'Dream Team', and its lively, spectacular style won admirers all around the world. That team, apart from enjoying the presence of the best trio of foreigners in the world (Stoichkov, Laudrup and Koeman and, later, Romario), also had a strong core of Spaniards, essentially formed by Basques and Catalans (Bakero, Berguiristain, Salinas, Guardiola, Ferrer, Sergi...) who made up a solid block alongside other great players such as Amor, Nadal and Eusebio.

However, the Dutchman's two last seasons at the Club were far less successful, and during that time, Barça failed to capture a single title. As a result of his very public disagreements with the president, Josep Lluís Núńez, Cruyff left the club via the back door. It was only after a series of legal disputes that the Club and the Dutchman came to the agreement to stage two emotional testimonials at the Camp Nou and Amsterdam Arena.

Never in the history of the Club has any one manager won as many titles as Johan Cruyff: 1 European Cup, 1 Cup Winners Cup, 4 Leagues, 1 Spanish Cup, 1 European Super Cup and 3 Spanish Super Cups.