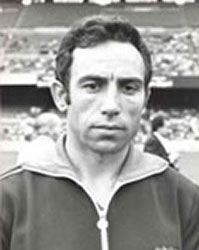 On 18th April 1979 Barça were knocked out of the Copa del Rey by Valencia. The result of the return match was 4-0. Taking into account that Barça had won the first leg 4-1, this was a terrible blow for the team.

The Board got to work immediately and decided to replace Lucien Müller with the Rifé-Torres duo. The first and only real objective that these two managers had was to ensure Barça got to the final of the Cup Winners' Cup, which was to be held in Basle. They not only managed to do this, but they also won the final, thus giving Barcelona Football Club its first important European trophy. 40,000 Barça supporters made their way to Switzerland to watch their team win the first of the four Cup Winners' Cups that Barça now has in its trophy cabinet .

The following season the team was knocked out of the Cup Winners' Cup by Valencia and Josep Lluis Núńez decided to put an end to Quimet Rifé's period on the bench, replacing him with Helenio Herrera, who came back for his second spell at Barcelona Football Club.