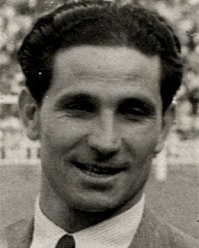 Joan Josep Nogués played for Barcelona Football Club before and after the Civil War.

In the autumn years of his career in the first team, he was called on to take charge of Barça's professional squad and substitute another ex-player, Gúzman. With the man from Aragon on the manager's bench, the team experienced one of the strangest situations in the history of Barça. On the one hand Barça won the Cup, whilst on the other they were on the point of going down. Luckily, the team managed to beat Murcia in a tense and desperate relegation play-off.

In the season of his departure, Müller was substituted by another all time great, Josep Samitier.