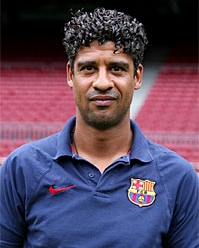 In his five seasons at the club, Rijkaard won numerous titles including two Leagues (2005 and 2006) and the Champions League (2006), and also did things in an elegant, consistent way with respect for all.

Rijkaard, who came to Barēa with the reputation of being a calm, sensible and honourable man, began his time in charge alongside fellow countryman Henk Ten Cate, ex-coach at Nac Breda, and Eusebio Sacristan, ex-member of the Dream Team, as assistant coaches.

As coach he was very open and communicative with all his colleagues and players. His footballing philosophy came from the Dutch school, characterised by attacking football, the importance of pressure and playing wide. He also focussed on defence, after five years in the Italian league as a player with AC Milan. At any event, he remained loyal to his principles and was a fine example of how to behave both on and off the pitch. Frank Rijkaard’s time at FC Barcelona was very positive in his first three years (2003-06), with two League titles and the club’s second Champions League, although this record wasn’t maintained in his last two seasons (2006-08)

Classification for the Champions League

The Rijkaard era began in 2003-04, with Ronaldinho as the big star on the pitch. The club had had four barren seasons and was playing in the UEFA Cup. After a poor first half to the season, the signing of Dutch midfielder Edgar Davids in the January transfer window was a turning point. The coach consolidated his tactical system and the team climbed up the table to finish second in the League, something which had seemed impossible in the darkest moments. Knocked out of the UEFA Cup by Celtic and the King’s Cup by Saragossa, Barēa finished the season with just one title in the shape of the Catalan Cup, but at the end of the day had showed there was hope for the future.

In the 2004-05 season the team made a qualitative leap with the arrival of stars such as Eto’o, Deco, Larsson, Giuly, Edmķlson, Belletti and Sylvinho. Despite four serious injuries in the first part of the championship (Motta, Gabri, Edmķlson and Larsson), Barēa overcame the difficulties and with attacking football won the League with authority. The title was won away at Llevant with three games still to go. The side also won the Catalan Cup that season, having been knocked out of the Champions League and the King’s Cup by Chelsea and Gramenet respectively.

The pinnacle of Rijkaard’s achievement came in the 2005/06 season. His side dazzled Europe with memorable performances at Stamford Bridge (1-2) and San Siro (0-1), before winning the club’s second Champions League title in Paris against Arsenal (2-1). Barēa also retained their League title with some spectacular football which included a winning streak of 14 games (including a 0-3 win at Bernabéu which led to them being applauded by the Madrid fans). They also won the European Super Cup by beating Betis, with the only negative point being elimination from the King’s Cup at the hands of Saragossa. At an individual level, in that virtually unsurpassable 2006 Rijkaard was chosen World’s Best Manager by the International Federation of Football History and Statistics (IFFHS), ahead of José Mourinho and Juande Ramos.

The 2006-07 season was a disappointment. Knocked out on the away goals rule by Liverpool in the last 16 of the Champions League, goal difference deprived Barēa of its third League title in a row. Also painful was elimination from the King’s Cup in the semi-finals by Getafe. Moreover Seville and Internacional de Porto Alegre defeated Barēa in the European Super Cup and the World Club Championship respectively. The Spanish Super Cup and the Catalan Cup were the only titles to be won that season, with Espanyol as the runners-up in both cases.

The summer of 2007 saw the arrival of Henry, Touré, Abidal and Milito which in principle meant Barēa had one of the best squads in its history. The team was one goal away from both the Champions League final and the King’s Cup final, with Manchester United and Valencia putting out the Catalans who perhaps deserved better on both occasions. In the League the team was unable to achieve the consistency required due to physical wear and tear and injuries, and ended up in third place.

Rijkaard managed Barēa in 283 official games, with 167 victories, 64 draws and 52 defeats, scoring 544 goals and letting in 254. His win percentage was 59%, with an average of 1.92 goals scored and 0.89 conceded per game. His 112 victories in the League put him in second spot as a Barēa coach in this competition behind Johan Cruyff on 183.

Rijkaard began his coaching career at the 1998 World Cup as assistant to Guus Hiddink with Holland. Between 1998 and 2000 he was the Dutch coach, and in 2001-02 managed Sparta Rotterdam.

An exemplary player as well

Rijkaard had an exceptional career as a player. He graduated from the Ajax youth academy and played for the Amsterdam outfit between the 1980-81 and 1987-88 seasons. In this latter season he also played for a few months at Real Saragossa, totalling 11 matches. Most of his greatest successes came with AC Milan between 1988 and 1993.