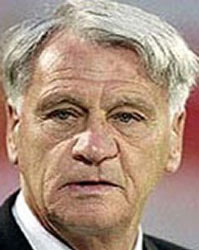 This English gentleman came to Barcelona with the difficult task of substituting Johan Cruyff.

There is no doubt that the extra pressure that that supposed, added to heavy criticism of his tactical ideas, made it difficult for Bobby Robson to enjoy an easy season. Nevertheless, the English manager responded by winning titles against all the odds. ¨ 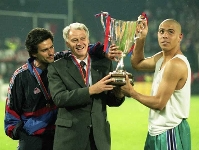 The team came second in the league, won the Cup Winners Cup against PSG (1-0) and also claimed the Spanish Cup, beating Betis (3-2) on an unforgettable night at the Santiago Bernabeu stadium. The semi final of that competition was also a memorable occasion, including an epic comeback at the Camp Nou.Despite success on the field, Bobby Robson's destiny was already decided before the season had started: Louis Van Gaal was always going to take over at Barça for the next few seasons. When the Dutchman arrived, Bobby Robson, who had enjoyed such a successful season on Barcelona's bench, was handed a position as part of the club's technical team.

Robson moved on from Barcelona in the summer of 1998, after succumbing to a tempting offer from one of his former clubs, PSV Eindhoven. In his two years at the club, the Englishman, who managed to get the best out of the young and effective Ronaldo, won himself a place in the hearts of Barcelona's supporters.