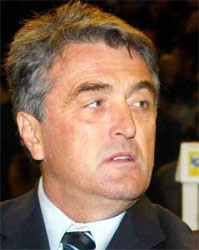 Radomir Antic was born in Zitiste (Serbia) on 22nd November 1948. He joined FC Barcelona in January 2003 to take over from Louis van Gaal.

Caretaker manager, Jesus Antonio de la Cruz, took temporary charge of team affairs until Antic took the reins with the team in 15th position in the Spanish League and well placed in the second phase of the Champions League. Like many other coaches, Radomir Antic was a player before he took up management. He started his playing career with Sloboda Tyzla of Yugoslavia (1967-1968) and then moved to the club where he would play most seasons, Partizan Belgrade (1968-1976). As coincidence would have it, Barça basketball coach Svetislav Pesic was playing in the Partizan basketball team at the same time.