Firm base for the future

Firm base for the future

The future of the basketball section is moving along bit by bit, but at a decent pace. This season names like Jose Peréz, amongst others, have come to the fore. 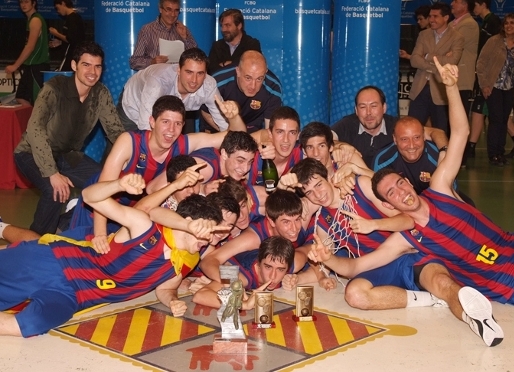 The bringing back of the reserve team was used to give minutes to squad players. So, in an important league like LEB-Silver, the lads from the Barça B team acquired experience whilst waiting for a chance to play for the first team or appear in squads at ACB level.

Names such as Angel Aparicio, Papa Abdoulaye Mbaye, Carles Marzo and Joan Creus, amongst others, played some minutes in the first team, although mainly symbolic.

However, in the B team their role was important. The basketball second team didn’t have an easy season, given that the bad luck in the form of injuries upset the pre-planning. Despite this, and the youth of the team, the reserves, under the orders of Borja Comenge, achieved maturity thanks to hard work. Thanks mainly to the defence, the team had options right up to the last day of qualifying for the play-offs to get promotion to LEB-Gold. In the end it wasn’t to be, but the 10th place where they ended up was pretty good for a debut season.

A lot to work with and a team that is slowly growing up. The junior team confirmed their great potential in the regular season in the Catalonian championship, finishing first with just two defeats.

With Juan Carlos Pié as coach, the juniors shone in the 'Hospitalet tournament, a Christmas classic where Barça recaptured the title they had not won for 10 years. Josep Pérez, the team’s Base player, was named MVP.

Josep Pérez's talent, and that of other players, was key in the seasons evolution. Only defeat at the hands of Joventut in the semifinals of the Catalonian Championship stopped it being a fantastic season. Barça, however, won the consolation final, a result that gave them the right to participate in the Spanish Championship. Here, once again with Joventut as their rivals, the team now coached by Borja Comenge won 64-59.

It’s worth noting that that Josep Pérez, Oriol Paulí, and Gerard Colomés, have been champions of Spain for Barça in both the Infant and Cadet categories and now they are Junior champions.

On the other hand, in the parallel Junior category tournament that took place at the same time as the Euroleague Final Four (and for which they qualified by winning the tournament in Hospitalet), Barça were unable to demonstrate their full potential and were unable to qualify for the final.

The second year cadets finished in second position in the Spanish Championships. Marc Calderon’s team lost the final against Joventut (69-62). On an individual level it’s worth remembering the name of Bernat Camarasa, a player who scored 24 points in the final.

Barça lost the final against Joventut, although they did win the Catalonian Championship , against the same team(61-67). Adrian Cantenys was elected MVP (32 rating, with 17 points and 12 rebounds).

Catenys, an outside forward born in 1995, was one of the names of the season, and he was selected to attend the Jordan Brand, a concentration of young talent in Europe held in London, and in which, under the orders of top U.S. coaches, the idea is to promote and develop the skills of these privileged few.

Rankings: Catalonian Champions, and runners-up in the Spanish Championship

The Barça Basketball Youth teams kept the bar very high, considering that the players were competing against older boys. The first year cadets were put to the test against rivals at a superior level, however, their progress both in the first phase of the Catalonian Championship, and the second, was notable.

The team coached by Xavi Armengol qualified for the second phase in third place, only behind Joventut and Manresa, teams that reached the final stages. In the second half of the season, Barça finished sixth, and Joventut, Regal Barcelona, Manresa and Cornella took part in the Final Four, and only Girona improved their ranking.

Often the effort and the work of an entire season doesn’t reap it’s just rewards. Nuria Montolío’s team were great during the regular season in the Catalonian Championship, ending up with a convincing 14-0 match run. However, in the Final Four, St. Joseph from Badalona prevented them from playing in the final, as they lost 73-74 in the semifinal.

The pressure in the consolation final for a place in the Spanish Championship was too much, and Barça lost to Joventut (64-86), to end the season.

It should also be noted that in the fina of the Minicup, a tournament parallel to the Spanish ACB Cup, Barça got to the Final, losing the last game against Joventut 77-84.

The youngest basketball team demonstrated the basketballs section’s reason-to-be. In the same way as Cadet B, the first year Infants competed against older kids. However, the results confirmed the team’s progress. A balance of 17-1 in the Catalonian Championship reaffirmed the talent and the effort of Oscar Orellana’s kids, who also lifted the important trophy in the Tres Cantos International Tournament, by beating Real Madrid in the final (55-33 ). In additionat an individual level, Mŕxim Esteban received recognition as top scorer in the tournament.