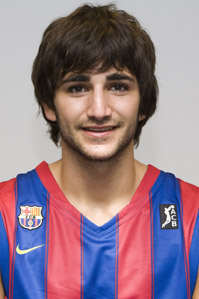 At the age of just four, Ricky Rubio started bouncing a basketball at his local club, Masnou Basquetbol. For many years he should have been playing minibasketball, but actually played for older teams.

For five years at Masnou, he was always among the stars of any competition he took part in.

2002/03 Season
His first big step forward came when he departed Masnou to form part of Club Joventut de Badalona at infantil level, and the real promise of this youngster started shining through. At La Penya, Ricky Rubio was champion of Catalonia and runner up in Spain.

2003/04 Season
Part of a growing team, Ricky Rubio soon displayed talent. Joventut appeared at the MiniCup in Sevilla, the infantil equivalent of the Copa del Rey. The point guard was named MVP of the tournament and also led the scoring.

As the main man for the green and blacks, Rubio led the team to the Championships of both Spain and Catalonia in the age group.

2004/05 Season
Wherever he played, the titles came too. Now a cadet, La Penya and Ricky Rubio won the Torneig del Moral in Santa Coloma de Gramenet. Rubio was named best passer and best scorer in that competition. The green and blacks were also proclaimed runners up in Catalonia.

2005/06 Season
Ricky was growing as a player, and the basketball elite took note. Aíto García Reneses had no doubts, and aged just 14 years Ricky Rubio started training with the first team at DKV Joventut. On October 15 of that season, he made his debut in the ACB against CB Granada. In five minutes he scored two points and provided one assist and stole two balls.

That season the Badalona based squad won two major titles, assisted by Rubio: the Catalan League and the FIBA Eurocup.

2006/07 Season
On the day of his 16th birthday, Ricky Rubio signed his first professional contract. In his first season as a pro, the young point guard got his first taste of Europe’s premier club competition: the Euroleague. DKV Joventut were knocked out in the round of sixteen, ending fifth in the table. The young lad from Masnou posted some impressive averages in Europe: in the 16 matches he played he averaged 3.6 points and took a total of 38 rebounds. On an individual level, he topped the stats for steals.

In the ACB, he was also on form. The green and blacks finished third in the ACB and Ricky Rubio was named the best young player in the Spanish championship.

2007/08 Season
Eleven seasons after DKV Joventut had last won the Copa del Rey, Ricky Rubio helped them to another win in Vitoria, where they won the semifinal against Real Madrid and won the final against host team Tau, by a close 82-80.

That season, La Penya also collected the Catalan League (against Akasvayu 84-66) and came third in the ACB League, as well as winning the ULEB Cup (also against Akasvayu 54-79).

To complete the season, he also won individual awards: best young player in Europe and also a place in the ideal five of the ACB.

2008/09 Season
In the summer of 2008 there were big changes in store for the rising talent. He got his first call-up to the Spanish national team for none other than the Beijing Olympic Games. He hurt his hand during the tournament, as the team went on to win a famous silver in Beijing. The injury meant it would take longer for him to get fit again to play for La Penya.

Ricky missed out on the Catalan League, but his teammates still managed to win the title for the eleventh time by winning the final against Regal FC Barcelona 83-95.

Once recovered, Ricky Rubio showed his potential, with an average of 6.14 assists and 2.18 steals per game, Rubio led the ACB in both categories. His leadership took Joventut into the play-offs for the ACB League. The first match-up pitted them against Real Madrid, and the season ended there, with 2-1 defeat.

Ricky Rubio made a great start to his time at the club, winning the Lliga Catalana on the fourth attempt as Regal beat DKV Joventut 38-62 in the final, whilst he himself won the MVP award in the game at the Palau Sant Jordi.

In the Euroleague, Barça achieved complete success and Ricky confirmed his position as one of the greatest promises in the game. He played an average of 21 minutes, with 22 points per game and stats similar to his ACB season of 4,1 assists and three rebounds and a 10,7 valuation.

The nineteen-year-old had a great game against Montepaschi de Siena, playing 25 minutes and scoring 14 points, taking three rebounds and giving 10 assists. These brilliant figures led to a 33 point valuation and the award of European player of week 10.

Ricky also received the Euroleague Rising Star Award and picked up the 2009 European Youth Player Award given by FIBA.

Ricky Rubio also starred in the Spanish Cup, taking 13 points in the final against Real Madrid, taking one rebound and giving three assists to give him a 12 point valuation for his 21 minutes on court.

Ricky was one of the few players who played in all of the team’s 71 official games during the season – 63 of which ended in victory.

His leadership skills have always made him a natural choice for inclusion in the national teams of Catalonia and Spain, and he has already won an impressive series of honours.

Other facts
As well as basketball, he also enjoys playing football.
His parents, Esteve and Tona, are huge fans of basketball. His brother Marc was also a youth player at La Penya.
In the final of the European Championship in Linares (2005) he was named top scorer, top rebounder, top in assists and MVP of the tournament.
In the final of the European Championship (2005) against Russia he scored 51 points, after two overtimes, one of which he forced after scoring a last second three pointer from the middle of the court.
Aged 14 years, 11 months and 24 days, he is the youngest player ever to appear in the ACB.
He was the number 5 pick in the 2009 NBA Draft for the Minnesota Timberwolves.

PROFILE
Ricky Rubio is one of those talents that leave nobody indifferent. His early talent and his tremendous leadership qualities are the central strands of his short but intense career so far. Apart from these factors, perhaps unique in a player of just 18, Rubio stands out for his fantastic reading of the game.

His trademark passes and enormous defensive skills make his one of the best stealers in the competition. His height (206 cm.) and long arms helped him achieve the best steal stats of his career in 2007/08 – an average of 2.3 in 33 regular phase games.