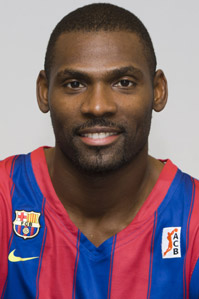 Pete Mickeal started playing hoops at Hills Community College until he went as a junior to the University of Cincinnati. Two years before starting college, he won his first titles.

In his second year at Indian Hills C.C., he was named best American for his year after leading the side to their second consecutive crown.

At the University of Cincinnati, he only played for two years before going in for the NBA Draft, where he was the second pick for the New York Knicks. But his NBA experience was short-lived, because he spent the whole season sidelined through injury, and in 2000/2001 he switched to the ABA, the rival tournament to the NBA. At the Tampa Bay Thunderdrawgs, the Kansas City Knights and the Talk’N Text Phones in the Philippines, the forward made his next moves. In 2002, Mickeal was named League MVP and also in the final, where the Knights claimed the championship.

2003/04 Season
Mickeal came to Europe in the year 2003, turning out for Peristeri in Greece. In his first experience of the game in Greece, the forward caught everybody’s eye: with 60.9% in 2-pointers, his averages were 21.1 points and 7.8 rebounds per game. Although Mickeal was looking good, the squad was relegated and Mickeal decided to go to a new team, Dynamo Moscow.

2004/05 Season
He was not in Russia for long. In the four matches he played for Dynamo he scored 10 points and took 6 rebounds. That discrete period in Russia led to Pete Mickeal going back to Greece, where he totted up the points on the paint for Makedonikos. The North American really started making the grade in the Greek League, with 17.9 points and 8.7 rebounds on average per game, and in the ULEB Cup, he claimed 19.1 points and 7.1 rebounds with an evaluation of 25. Makedonikos took silver in the ULEB Cup after losing the deciding match against Lietuvos Rytas Vílnius by 78-74.

2005/06 Season
Pete Mickeal first came to the ACB in 2005 with Leche Río Breogán, where his average evaluation was 21.4. Mickeal helped the Galicians along with 19 points and 7.3 rebounds on average per match. These good results were also converted into titles; he was named MVP for weeks 9 and 10 in November.

2006/07 Season
Keen to explore the basketball world, in 2006 he tried his luck in South Korea with the Daegu Orions. He had a splendid season in Asia, but didn’t feel he was playing at a competitive enough level. So, Mickeal packed his bags again, and returned to the ACB for good.

2007/08 Season
It was the ACB that really offered the chances for Mickeal to become a better player. A year after his Korean experience, Mickeal signed for Tau and became one of the central pillars of the Basque outfit’s plans. In the regular season he posted 9 points and 6.3 rebounds on average, and all of that helped one of the rising forces in Spanish basketball to win the ACB final. Mickeal was named MVP of the final played against FC Barcelona, a title that would be won a year later by his future colleague Juan Carlos Navarro. That year, Tau reached two other finals, the Super Cup and also the Copa del Rey. In the Super Cup Tau beat Real Madrid in the semi final and iurbentia Bilbao in the final – they had won three of the four editions of the cup, though this was the first for Mickeal.

But in the Copa del Rey, it was DKV Joventut who took the trophy by winning the final.

2008/09 Season
In his second and third year at Tau, Pete Mickeal continued collaborating in the team’s glory years. He reached 100 matches in the ACB League, contributing 12.3 points and 4.84 rebounds. In the league he managed 10.7 points and 5.6 rebounds on average per game. Regal Barça once again prevented Tau from winning the League title following a titanic duel in the ACB final. But Dusko Ivanovic’s charges did claim both the Super Cup and the Cup. The American once again showed that he has no fear of taking the reigns at decisive moments of matches. With 14 evaluation points in the Cup final, he scored the winning basket and then with an incredible block made sure the opposition didn’t cancel it out in the very last second of the game.

2009/10 Season
Pete Mickael has been a blessing to Regal FC Barcelona. The forward has made a huge difference in the Liga ACB and in Europe since he joined the club. In his first season in Blaugrana colours the American star won the Supercup ACB, the Copa del Rey and the Euroleague and played a vital role in helping the team to clinch each one.

The first signs of what talent Mickael has came in Gran Canaria in the Supercup at the start of the campaign when he was close to his best form. With an average of 11 points in the two opening games, in the final against Real Madrid he record 12 points and five rebounds in 29 minutes on the court. In the Liga ACB Mickael recorded average statistics of 10.7 points and 3.1 rebounds in the 41 games in which he appeared in both the regular season and the play-offs. His best games below the basket came against Granada and Manresa when Mickael scored 23 points and against Unicaja in the play-off semi finals he managed no less than ten steals.

In the Euroleague the Rock Island number 33 registered 12 points and five rebounds, on average, in 21 games. His best game in Europe came against Fenerbahçe, where he scored 33 valoration points after scoring 26 points, his best ever score, and seven rebounds. In the Final Four he was a key player and in the final itself scored 14 points and five rebounds in 27 minutes of play.

Barça played in Bilbao and won the Copa del Rey as Mickael scored 11 points per game and helped the side to a victory over Real Madrid in the final to end an almost perfect season for the newcomer.

National Team
Pete Mickeal played for the United States national team at the Pan-American Games in Winnipeg (Canada). They lost the final to Brazil, 95-78.

Others
Mickeal is a huge follower of other professional American sports, such as American football and baseball, both of which he also played as a kid.

His favourite football teams are the Chicago Bears and the Miami Dolphins.
When it comes to baseball, Pete Mickeal is a fan of the Chicago Cubs and the New York Yankees.

But other than American sports, Pete Mickeal has another great passion: sailing. He has his own boat in Miami, and loves meeting up with friends and going out to fish at sea together.
FC Barcelona.

PROFILE
Mickeal has shown time and again that he is a man to count on at crucial moments in the game. He grows in influence in difficult situations and his character and determination to win make him lethal in extreme situations such as the 2008/09 Cup, when TAU beat Unicaja thanks to his 14 points in extra time. He also sank the winning basket thanks to a spectacular tap in the dying seconds.

He’s an extremely powerful player capable of decisive interventions in both defence and attack. His number 3 position gives him plenty of scope for shooting and when he’s on fire he can win a game on his own.