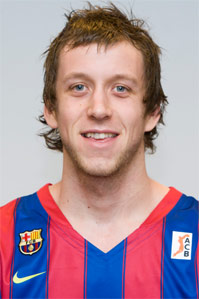 This Australian forward, who also owns a British passport, signed in November 2010 for three seasons, as the technical staff decided they needed cover for a number of injuries.

However, his signing was also a decision for the future after his impressive time at Granada and Ingles’ shooting skill, speed and agility, together with his ability to read the game in both attack and defence make the left hander a natural fit for Regal Barēa.

Ingles’ passion for the game began when he was just five years old when he joined the Australian Institute of Sport, a prestigious organisation dedicated to producing the best young Aussie basketball players.

Playing for the Melbourne South Dragons, Ingles was named rookie of the year in the Australian NBL, where he boasted an average of 18 points and 8 assists
per game. He set a record on his debut with 29 points – the most ever scored by a debutant in the NBL.

Continuing in Australia, Joe also played for the Bulleen Boomers in the lower league ABA, as his formation as a top player continued.

This was his definitive season with the Melbourne team, as they conquered the Australian league and Joe’s desire to move on took him to various “workouts” with NBA teams, playing in the summer league in Las Vegas with the Golden
State Warriors, where he caught the eye of a number of ABA scouts.

Signing for Granada, Joe soon became a reference point for the team’s attack. Against Regal, for instance, he played really well in both the game in Andalucķa and at the
Palau, scoring 10 points, 7 rebounds and 4 assists in Granada and 13 points, 5 rebounds and 2 assists in Barcelona. Regal won both games, but the Barēa technical staff had been impressed with Joe and taken note of his potential.
Joe didn’t just stand out in the games against Barēa of course – he got a 40 point valuation in the game against Fuenlabrada in week 14 and in week 20 in Santiago de Compostela he was again the top valued player of the week with a 34 point score.
Joe ended the season with an average of 29 minutes on court, 11 points, 3 rebounds, 3 assists and a valuation of 13 points.

After seven ACB games with Granada, Joe was picked up by Regal Barēa to cover the loss through injury of Gianluca Basile, but also as a long term option, with the Aussie signing on for three years. His impressive stats so far this season mark him out as a player for a big club with an average of 33 minutes on court, 13,3 points, 4 defensive rebounds and nearly 1 in attack, 3,9 assists and a global valuation average of 17 points.