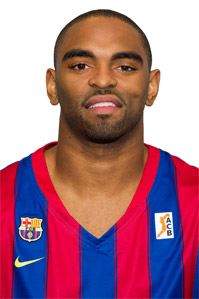 The American shooting guard / small forward arrived at Regal FC Barcelona in December 2010 to cover for the team’s many roster problems. He signed a contract until the end of the season.

He has already impressed in Europe for Cibona and Maccabi and awoke the interest of many teams, but it was Barça that eventually secured the rights to the player.

Anderson was born on October 16, 1982 in Minneapolis (Minnesota – USA), and played college hoops for Michigan State and led the American team to the gold medal at the USA Basketball Youth Development Festival.

He was not entered for the NBA draft but still managed to secure a contract with the Bobcats, and alternated experiences with the Development Leagues in The States.

In 2007, he decided to cross the Atlantic and found work with Vidivic Bologna. He then moved to Russia and Triumph Liubertsy.

Europe was beginning to notice him, and his next port of call was Croatian club Cibona, where he averaged 15.3 points, 4.8 rebounds and two assists.

This was enough to gain him a better contract at Maccabi de Tel Aviv. Last season Anderson held onto a regular place, posting some stellar performances, especially one against Real Madrid in the Top 40 where he obtained 40 evaluation points for 20 points, 5 assists and 4 steals.

Anderson was also impressive against Lottomatica, and it was his late score that won the game for the Israelis at 90-92. Against Partizan, Alan Anderson equalled his personal European record of five assists.