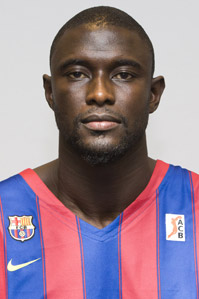 Boni, as he is known to his teammates, became a Barca player on 18th July 2009 after Unicaja Malaga decided not to exercise their option on his contract.

Boni is a full international with Senegal and has always defended the talent of the growing number of African players in the ACB.

He started his career as a professional player late. After playing in his own country he decided to make the leap to the European game when he was just 22 years old.

Season 2000/01
His fighting spirit and agility allowed him to continue improving, this season at TSV Breitengrussbach in the German Second Division

Season 2002/03
Bamberg gave him his first chance in the first division, but knee trouble, which meant a close season operation, ended his time in Germany. After playing just 8 games his averages were 4.6 points and 4.1 rebounds.

Season 2003/04
In France, with Dijon, Boniface Ndong bounced back to his best and although he only featured in 8 games, his stats of 11.6 points and 7.6 rebounds average per game ensured his contract renewal for another season.

Season 2004/05
This was the season that Ndong, really hit his stride with averages of 14,6 points and 8,4 rebounds in the 34 games he played. He also improved his shooting percentages with 51.9 % in two-point shots and 25 % in three pointers and he also featured in the French League All Star game.

Season 2005/06
After a summer season with the Denver Nuggets, the LA Clippers offered him an NBA contract and although he figured in just 23 games, the experience of being with the best players in the world was priceless. His best figures in the NBA were 6 points three times and seven rebounds in two games.

Season 2006/07
The Russian team Spartak Sant Petersburg was his next destination. When they signed him, Spartak were bottom of their league, but his contribution meant that they ended up playing in the play offs. His stats were 9,6 rebounds and more than 15 points per game.

Once the Russian season finished, he was off to Malaga, where impressed in the play off against TAU.

Season 2007/08
The 2007/08 season was another step forward and he averaged 16 points in the ACB quarter finals, though not even a 23 evaluation rating was enough to see Unicaja through the semis against eventual champions TAU.

Season 2009/10
In his first season as Barça player, Ndong won himself a place in the first team and began in the starting five in 75% of the games in which he figured - 31 out of 41 in the ACB and 15 out of 21 in Europe. l’Eurolliga. Despite fierce competition in his position, Ndong maintained his numbers at a high level, recording an average of 6.8 points in the ACB and 9.7 in Europe.

The Senegalese star earned his first honours as a professional at the club with the four titles the team won last year: Lliga catalana, Super Cup, Spanish Cup and Euroleague.
His best performance in the ACB was in the 54-73 win over Murcia, when he was the man of the match with 11 points, 14 rebounds and a +23 valuation. In the Euroleague against (79-69) h scored 15 points and 12 rebounds.

National Team
With Senegal, his greatest achievement was reaching the 2005 African Championships.

He loves fishing and explains that in Senegal the fish is lovely to eat, though after trying the Mediterranean fish in Malaga he also enjoys the Spanish varieties.

He also loves swimming and has taken part in races of up to 7km.

PROFILE
Ndong brings quality, intimidation, rebounds and a hard workrate to the team. The Senegalese centre, MVP of round 30 of last season’s NBA, has plenty to offer.

‘Boni’, as the basketball world knows him, is willing to make sacrifices, and has the kind of humility that instils calm in all around him. His relaxed attitude is contagious, and he claims he learned to be like that after spending six years at a private Catholic school. It was there that he started taking in interest in building a career for himself in journalism, although as it turned out, Ndong’s future actually lay in the world of hoops.