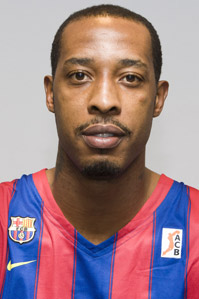 Terence, as he is known to his team mates, officially became a member of Regal Barēa on 13 July 2009, after spending the previous season at CSKA Moscow.

Before coming to Barcelona, the North American power forward had played in the United States, Greece, Israel and Moscow.

Born on the 11 January 1979 in Frederick, in Maryland, Terence Morris learned the game in his native United States: first at ‘high-school’ at Thomas Johnson, in Frederick, and eventually at the University of Maryland (1997-2001).

2002/03 Season
In his second season in Texas, the power forward posted averages of 12.9 minutes, 3.7 points and 2.6 rebounds. Morris played his best game for the team on 15 April 2003 against the Memphis Grizzlies. He scored 17 points.

2003/04 Season
Until the 2003/04 season he was on the NBA team’s roster. In Texas he played a total of 117 matches. Given that he was struggling to hold down a regular place, he opted to switch to the Columbus Riverdragons, playing in the NBDL. He appeared in 46 games, with averages of 26.5 minutes, 11.4 points and 7.3 rebounds.

2004/05 Season
In January 2005, he left America to play basketball in Greece, at Apollon Patros. In his first taste of European basketball, he played in 15 matches and gained impressive stats of 11.4 points and 6.8 rebounds.

Seasons 2005/06
In the 2005/06 season he was back in the United States, where he was taken to Orlando Magic, playing 22 matches. Not having had the best of luck in Florida, in December 2006 he opted for a move back across the sea to Hapoel in Jerusalem.

2007/08 Season
With Maccabi Tel Aviv he was particularly outstanding in European games. At home he played 26 matches, with averages of 11.3 points and 8.1 rebounds, while in the Euroleague he was noticeably more prolific: 12.4 points and 8.3 rebounds in 25 games played.

His best European outing was against Real Madrid. That was on 13 March 2008, when Morris scored 23 points and obtained 31 in evaluation points.

2008/09 Season
After doing so well at Maccabi, CSKA and Ettore Messina started knocking on the door. But he struggled to adapt to a new culture and the cold, and failed to hold down a regular place under the Italian mastermind.

But although Morris could celebrate a Russian championship, he played just 9 matches in the Euroleague, with averages of 20.4 minutes, 6.7 points and 4.9 rebounds. The team was runner up in the continental championship after beating Barēa in the semifinal of the Final Four in Berlin but losing to Panathinaikos in the grand final.

2009/10 Season
In his first season at the club, Morris gradually adapted to his new team and a new competition and became a key part of Xavi Pascual’s plans in a plethoric end of season. He bettered his regular season figures in the play offs with an average of 9,4 points and 7 rebounds in the final phase compared to 6,1 points and 4 rebounds a game in the regular season.

The presence of the American forward in the starting five has become synonymous with winning for the team, who were victorious in all of his 14 starting league games. It proved to be the same story in Europe and the Euroleague Final Four victory in Paris gave Morris his first title after three years in the final.

One of his best performances in Europe was at Maroussi where Regal Barēa beat the Greek outfit 58-85 with 12 points and five balls recovered by Morris. In the ACB, his best game was probably against Unicaja in the first game of the semi-final play offs (96-82) when he chalked up 21 points, 9 rebounds and a +29 valuation.

Others
Terence Morris is a player with some unusual hobbies – or at least they’re not so common among the majority of players. In his case the American basketball star is passionate about art.

Morris loves sketching and painting. But that’s not his only way of having fun off the courts. Terence also likes cutting hair – either his own or a friend’s.

Profile
Terence Morris is one of the most promising power forwards in the European game. He may not have enjoyed too many opportunities at CSKA under Ettore Messina, but otherwise he has excelled wherever he has travelled. Especially at Maccabi, where he played for two years, he was a highly influential member of the squad.

There he demonstrated his physical might, agility and versatility. Morris also has a terrific shot, and particularly impresses from a distance. In Israel he picked up a 50% rate in 3-pointers and 60% in two point throws. At CSKA, he failed to convince Messina, but managed to maintain the same kind of percentages in the Euroleague: 54.1% in 2-pointers and 50% in shooting the three.

Naturally, one of his most important roles in any team, is winning rebounds, but he is also a highly intimidating blocker. His highest register was six blocks in Maccabi’s game with Zalgiris on March 20, 2008 in Israel (80-66).