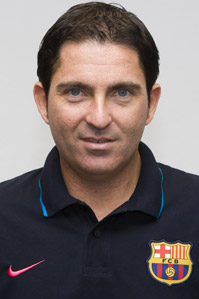 Xavi Pascual took as coach of Barþa on February 14, 2008 after the club opted to end Dusko Ivanovic's time in charge of the basketball team. After two-and-a-half years as assistant to the Montengran trainer, he stepped up to take the helm.

Xavier Pascual started as a coach with the minibasketball team at CB GavÓ (1990/91), a club he stayed at until the year 1994. In four seasons he coached different youth categories at the club and often looked after more than one team a year. While coaching minibasketball his greatest accolade was taking charge of the Barcelona select team (90/91).

In the 1994/95 season he started coaching adults, in the form of the Senior B team at CB CornellÓ. That same year he coached the Under 20 side at the same club. In the following year, Pascual became assistant coach of the CB CornellÓ first team, in the EBA League. For two seasons he assisted AgustÝ Cuesta at a team that included the likes of Quique Moraga, Roberto Due±as and Oriol Junyent, among others. In those two years he came second and third in the League, and also took one EBA Catalan League. CB Santfeliuenc, in Second National (now Catalonia Cup), CB Olesa in Second National, where he won promotion to the EBA League, were his next teams.

Before signing for Barþa, Xavi Pascual coached CB for three seasons, extending his honours list. First he won the double of the EBA Catalan League and promotion to LEB-2. In the 2002/03 season he retained the League title and gained promotion to the LEB, also winning the Price of Asturias Cup and getting to the final of the Catalan League - LEB-2. The next season, Pascual won the LEB Catalan League, but was unable to avoid relegation to the LEB-2.

In the 2004/05 season he signed for FC Barcelona. He was head coach of the FC Barcelona second team (EBA) and also technical director of youth basketball. Finally, in the year 2005 and until midway through the 2007/08 season, Pascual was assistant coach of the Barþa first team alongside Dusko Ivanovic. That season they won the Copa del Rey and came runners up in the ACB League (2006-07). In February 2008 Dusko Ivanovic was sacked and Xavi Pascual took over the team. Until the end of the season the side improved remarkably. In the play-off against Iurbentia Bilbao in the quarter final and against DKV Joventut in the semi final this was plain to see.

Coming runners up in the League and causing such a marked improvement in the team meant Xavi Pascual gained the club’s confidence, and he stayed on for the 2008-09 season. With Juan Carlos Navarro as the star, Xavi Pascual made history. He became the youngest coach ever to win the ACB League, after a gripping final against TAU Vit‗ria, now managed by Barþa’s former head coach, Dusko Ivanovic. In the fourth game of the play-off series, played at the Palau Blaugrana on 18 June 2009, Xavi Pascual’s side was crowned champions of the ACB League, his first title as coach of the team. Shortly before that they had won passage to the Final Four of the Euroleague, after eliminating TAU in the quarter final. But in Berlin, Barþa lost to CSKA Moscow. But the 2008-09 season was definitely the consolidation of Xavi Pascual on the FC Barcelona bench.