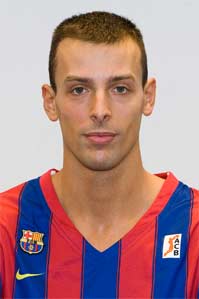 Jordi Trias signed for FC Barcelona in the summer of 2004, straight from CB Girona. That same year he returned on loan to the Girona based club, but was full-time on the Barēa books a year later.

He became an international with the Spanish national team B and was shortlisted for a place at the World Championship in Japan in 2006.

Quick and agile, and more than 2 metres tall, Jordi Trias, aged just 18 years, came into the basketball world from one of the best sources of youth talent in Catalonia, Adepaf Figueres. So fit was Trias that he combined training at Adepaf with first team appearances for Casademont Girona, to which they were a feeder club.

1999/00 Season
A week before turning 19, Trias made his ACB debut against Cantabria Lobos. He only got two minutes and scored no points, but he could say he formed part of the home team’s win (90-71). He got another chance nearer the end of the season, also at Fontajau, against Tau Vitņria. The power forward scored his first point and first rebound in the ACB League after just a minute on the paint. Girona won that game 90-84.

2000/01 Season
Trias played five games in the ACB League during the 2000/01 campaign. They were mainly testimonial minutes but the youngster made the most of every chance he got and always managed to score a point or two, or capture a rebound.

As the years went by, Trias gradually won a more regular place.

2001/02 Season
Before that, the small forward-centre had gone on loan to Etosa Mśrcia, in the LEB. Trias provided quality to a growing side, and in the 2002/03 season he was one of the main reasons why they came top of their division and returned to the ACB League.

2002/03 Season
After his time in Murcia, Trias went back to Casademont Girona and top flight hoops. The centre didn’t take long to show how much he had improved, and in game nine of the regular season, he posted some quality stats of 17 points and 10 rebounds.

2003/04 Season
His last season at Casademont was just as good. Trias played an average of 19 minutes per game, getting eight points and six rebounds.

Such progression meant that FC Barcelona took a natural interest.

2004/05 Season
Jordi Trias joined Barēa in 2004, with Joan Montes on the bench, and he provided an average of 4.6 points and 3.4 rebounds in the 12 minutes of average play he got in the ACB. Despite the good performances, he was competing for a place with Devin Davis, Andrija Zizic and also the recuperated Roberto Dueńas, which limited his time on court and led him to return to Casademont.

2005/06 Season
His first full year with the FC Barcelona first team was that of 2005/06. In the ACB that year, Trias got 12 minutes on average per game and signed 5 points and 2 rebounds, with 7 in evaluation points. These stats impressed, and he became part of the regular plans of the Balkan duo on the bench, Zoran Savic and Dusko Ivanovic.

2006/07 Season
But Jordi Trias’ finest season had yet to come. In the 2006/07 campaign, the power forward won his first major title with Barēa and was named MVP of the Copa del Rey with averages of 14.7 points, 6.3 rebounds and almost 24 evaluation points. He did just as well in the regular season: with 20 minutes on average per game, Trias posted stats of 7 points, 5 rebounds and 11 in evaluation points.

This made him the star center of the whole Spanish basketball scene. This was reflected by his being named for the 07 Eurobasket in Madrid, although he was eventually dropped in favour of Jorge Garbajosa, who had returned from a serious injury that had caused him to sit out a whole season in the NBA.

2007/08 Season
In his third year with FC Barcelona Trias continued producing results. In the ACB League, Jordi averaged 5.6 points and 4.5 rebounds per game, plus 8.8 in evaluation points. In Europe’s premier club competition, the power forward did likewise with 6.7 points per game, 5.2 rebounds and more than 11 evaluation points.

2008/09 Season
Trias had shown that he was the kind of player any team would need. He continued with a similar kind of role on court as in previous seasons (7 minutes on average per game, 2.6 points and 1.6 rebounds in the ACB and in the Euroleague 3.4 minutes on average, 5.2 points per game and 2.5 rebounds), his character and dedication every day of the week won the admiration of his colleagues, his coaches and also the fans.

Others
Best Spanish player of the month February 2007
Likes going to the cinema and spending the summer in Platja d’Aro (Costa Brava). Also likes travelling.
Has a partner in Anna Duch Torrent.

CHARACTERISTICS
Jordi Trias is a versatile number 4, who can offer many tactical options to the coach in the inside game, especially as a wingman and sometimes as a center. He throws well from distance (it’s not unusual to see him throw a three-pointer) and also has the necessary coordination to counterattack. In defence, his intensity is an added value for the team.