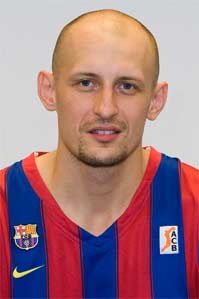 Lubos Barton started out as a basketball player for his hometown of Ceska Lipa in the north of the Czech Republic.

Several clubs in his country singled him out and in mid 1996, aged 16, BK SCE in the city of Decin won his services. Barton stayed at BK SCE in Decin until the 1997/98 season. At the end of the year he left for the USA and played in the NCAA for the University of Valparaiso, where he remained until 2001/02. He was the third highest points scorer for the University with a total of 1.675 points.

Season 2002/2003
On leaving Valparaíso, he played for Cleveland Cavaliers Rocky Mountain Review – the American summer league, before joining Skipper Bologna for a single season, in which the team finished runners up in the Italian League.

Season 2003/04
Barton stayed in Italy, moving to Rome to play at Lottomatica. His Euroleague stats were 11.8 evaluation with an average of 9,7 points and 4,8 rebounds.

Season 2004/05
In his second and final season in Rome, he repeated the same good results and DKV, who had been keeping tabs on him for a while signed him up for the next season.

Season 2005/06
The three years Barton spent at DKV were his best so far. In his first season he won his first titles – the Catalan League and the FIBA Eurocopa. His stats were an average of 9,1 points, 4,3 rebounds, a valuation of 9,3 and 22 minutes per game.

Season 2007/08
Lubos Barton's greatest success came in his last year at DKV Joventut, when he won the ULEB Cup and the Spanish Cup, after beating Tau Vitoria in the final and in the semifinals, Real Madrid. Barton, second player behind Rudy Fernández in minutes on court averaged 9,5 points and 3,5 rebounds per game. In the ACB, he enjoyed similar stats: 8,7 points and 4,8 rebounds with an 11 evaluation rating.

Season 2008/09
The next season Barton joined FC Barcelona, where he picked up his first ACB title, averaging 3,9 points, 2,9 rebounds and a 4,5 evaluation rating per game. In the final weeks of the season, Barton suffered a bad Achilles tendon injury which kept him on the sidelines for six months.

National Team
Lubos Barton has played at almost ever level for his National Team, from the Junior, the under 20 and of course the full National Team, with whom he reached the European Championships in 1999 where he averaged 18,7 points per game and was the second highest points scorer of the competition..

Profile
Lubos Barton can play as a three or a four, and it is three pointers that are his main threat. He is a great all-rounder, with a great throw and strong on the rebounds, and exceptionally consistent on the court. He may not be the most spectacular of players, but he always tends to get the right job done.

He has plenty of skill, and strikes fear into defences whenever he treads the perimeter. He also has plenty of experience of basketball at the highest level, and regularity is one of his finest virtues.