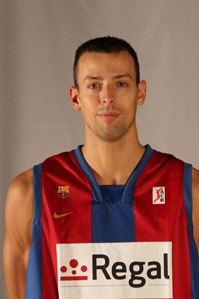 Jordi Trias learnt his basketball in the Club Bŕsquet Girona junior teams and made his professional ACB debut for his home town team in the 99-00 season.

After a season out on loan at Etosa Múrcia in the LEB league, Trias returned to Girona and was soon being talked about as one of the ACB's most promising youngsters.

During his time at Girona, he became a focal point of the team and in the 2004-5 season, Pesic signed him for Barca, his only signing that season. When Pesic left and Trias was unable to establish a regular place in the team, he was loaned out later in the season back to Girona, where he regained his confidence and again shone with a considerable number of points and rebounds.

He returned to Winterthur FC Barcelona at the start of the 2005-06 season and coach , Dusko Ivanovic has used him regular as a replacement.

Jordi Trias is a versatile number 4, who gives a wide range of options to his coach as a power forward or even as a centre. He's got a good and accurate throws, which regularly bring him three pointers and is highly adept at the quick counter attack. His concentration and focus in defence is another valuable asset to the team.