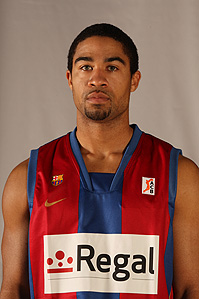 Born in the Bronx in New York on the 21st of February 1982, this 1.78m, 79kg guard who trained at Seton Hall University, passed through several teams before coming to European basketball.

FC Barcelona is his first experience of the old continent. Barrett has been a professional since 2004 and his last N.B.A. team were the Los Angeles Clippers.

However, before turning professional Andrť Barrett stood out during his University days. At Seton Hall, Barrett has the honour of being the player with the second highest number of assists (662) in the history of the University. What’s more, Barrett, who is good at three point shots, also has the honour of being the third best player of Seton Hall for the same (224) and the seventh in it’s history for points scored (1,861). He is also the player who has played most minutes in the University’s history-more than 4,000 minutes (4,296). His best performance of his University days was in the 2003/04 season against the prestigious Georgetown University, against whom he scored 25 points with 8/11 field shots.

Now in his professional career, he formed part of two N.B.A. teams in the 2004/05 season. In his first season, he played for the Houston Rockets, for whom he played 27 games with game averages of 2.1 points, 1.6 assists and 11.6 minutes. Shortly afterwards he signed for Orlando Magic, with whom he also improved with a 5.6 point average and 2.5 assists in the 11 games he played for the Florida team.

But where Barrett really made a name for himself was in the N.B.A. ‘rookie’ league. After several experiences with temporary contracts with N.B.A. teams, Andrť Barrett played for the Florida Flames where he had averages of 34.8 minutes, 6.6 assists and 17 points in the 33 games he played. This was during the 2005/06 season. After a short spell with the Chicago Bulls, where he was cut from the team before the league began, he continued in the D-League. Now in the 2007/08 season, with Bakersfield Jam, Barrett had some high averages of 38.2 minutes, 8.8 assists and 18.9 points from 30 games played.

Finally, his spell in the D-League finished in the Austin Toros, - the San Antonio Spurs’ rookie team, with whom he played out the season before signing for the Clippers on the 1st of March 2008. With the Toros he had averages of 37 minutes, 8.3 assists and 17.2 points in the 13 games he played.

Barrett is one of those black New Yorker guards, -small, cheeky and very fast. He also has a good exterior throw, a good middle distance shot and knows how to create spaces. from nothing. Another characteristic of this North American player is the way he penetrates defences easily.