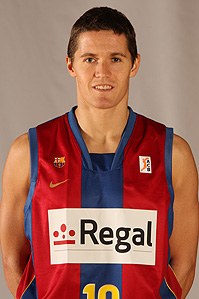 After starting out with Slovan in Ljubljana (Slovenia), where he made his first team debut aged 18 in the 96-97 season, he then moved to another of the biggest clubs in his country, Novo Mesto in 2000.

His speed, vision and amazing stats of 63.9 % in two pointers and 49.3 % in threes attracted the interest of one of the strongest clubs in Europe.

That team was Panathinaikos, who he joined in 2002 and played for over four seasons, collecting four Greek leagues and three Greek Cups. With 18 points and 2 assists he was named MVP of the Play Off for the Greek title against Olympiakos. In his last year in Greece, he averaged 16.2 points, 2.8 assists, 1.3 steals per game in Euroleague matches.

After his brilliant years in Greece, Lakovic decided it was time for a change, even considering the NBA before coming to Barcelona in July 2006, as one of the most wanted playmakers in Europe. He was presented along with Croatia's Mario Kasun.

Lakovic is classic Balkan player. His speed and vision have led to his being considered one of the best playmakers in Europe right now.