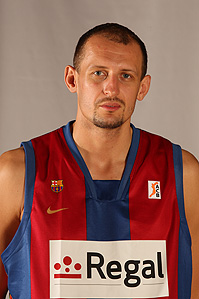 Lubos Barton started out as a basketball player for his hometown of Ceska Lipa in the north of the Czech Republic.

Several clubs in his country singled him out and in mid 1996, aged 16, BK SCE in the city of Decin won his services.

Barton stayed at BK SCE in Decin until the 1997/98 season. At the end of the year he left for the USA and played in the NCAA for the University of Valparaíso, where he remained until 2001/02.

In the summer of 2002, after appearing in the Rocky Mountain Revue, the American summer league, with the Cleveland Cavaliers, he signed for Skipper Bologna. He was only in the city for a year, where his team finished second in the league. Next he was off to Rome, and Lotomattica, where he enjoyed two seasons before moving to the Spanish ACB.

In 2005 it was DKV Joventut who signed Lubos Barton. In three years in Badalona, the Czech reached new career heights. In his first season he had already won the Catalan League and the FIBA Eurocup.

But Barton’s biggest success came a year later as his side was victorious on the ULEB Cup, and also won the Copa del Rey, defeating host side Tau in the final.

Lubos Barton has also played international hoops for the Czech Republic at just about every level. From the Juniors he went on to the Under 20s and made his full international debut at Eurobasket 1999 in France, in which he was the second highest scorer with an average of 18.7 points. He was also involved in Eurobasket 2007 in Spain.

Lubos Barton can play as a three or a four, and it is three pointers that are his main threat. He is a great all-rounder, with a great throw and strong on the rebounds, and exceptionally consistent on the court. He may not be the most spectacular of players, but he always tends to get the right job done.

He has plenty of skill, and strikes fear into defences whenever he treads the perimeter. He also has plenty of experience of basketball at the highest level, and regularity is one of his finest virtues.