Players in their Sunday best

Players in their Sunday best

The first team squad took part in the official photos for 2010/2011 this Thursday morning ahead of the training session held at the Miniestadi.

The squad first appeared on the Nou Camp turf at 10.05 wearing their official Dsquared suits, in contrast to the shirts and shorts that they were wearing for last night’s win over Ceuta .

Getting the details right 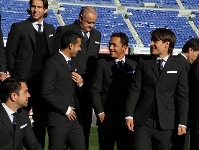 The representatives of the official suit company, the photographers and the players all discussed how exactly they were to pose for the shoot and the details of how to wear their collars, how many buttons to do up and so on. Finally, the players posed in the sunshine at one end of the pitch and the problem now was how to sit and stand –then the photo was taken and the scene changed again.

At 10.15 the players went back to change into their kit and ten minutes later, they were assembled in the tunnel ready to come out onto the pitch – that was when Valdes and Pinto led the players in their traditional pre-match chants and then the players came out into the Nou Camp sunshine. 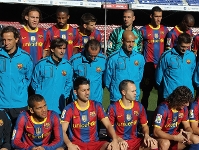 Posing in the same area at one end of the pitch, the players, President Sandro Rosell, Pep Guardiola and the rest of the staff were photographed first behind the sponsors logos and then without. The President, who was present throughout the session, spoke with the players and for a while longer with Pep Guardiola.

Two of the Youth team players called up into the squad training session for after the photos, Gerard Deulofeu and Rafa Alcántara, came out onto the pitch and looked on as the first team players posed for their pictures. 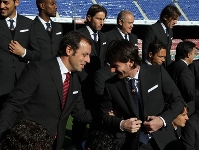 Once the photo shoot was finished, the players got changed again and walked over to the Miniestadi where Guardiola had scheduled their morning training session. For David Villa it was his first experience of the ground and Victor Valdés explained its significance to so many of the team who have come up through the ranks: “this is the ground where a lot of us were born!”