Pep Guardiola chose to pick out Young midfielder MartĒ Riverola as an example of the clubÆs ability to bring through youngsters, telling reporters: ōthis is a success for the whole clubö.

MartĒ has been at the club since he was a child, joining the FCB Football School when he was just six years old and his appearance for the first team in the 2-5 win in Seoul was the culmination, so far, of many years of hard work at the club. 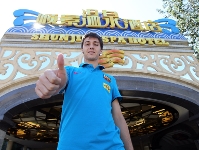 Born on 26th January 1991, in Barcelona, MartĒ Riverola joined the club’s Benjamin B team in 1999/2000 and last year he made his debut for Barńa B at Espanyol. Now, just a few months later he is part of the first team Tour of Asia and has been singled out by Guardiola as a perfect example of the good work done in the club’s youth teams: “it’s an acknowledgement of the whole institution, of so much hard work of so many people”, according to the boss. 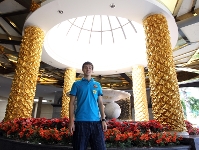 MartĒ agrees with Guardiola: “I heard what he said to the press and I have to agree. It’s a collective success for the institution to take a player through to the first team. Every coach I’ve had has brought something. I’m very happy to continue progressing and I want to always keep on doing so”.

MartĒ admitted that his hero as a child was “the manager I guess”, but stressed: “what I most like about Barńa is our style of play, the way we pass the ball. I’ve always liked that and I’ve been schooled in that style”.

“This tour is a special prize” 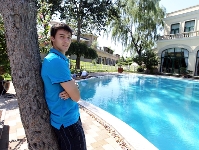 The midfielder is also well aware that the experiences on tour are an extra, but there is still plenty of work ahead: “I’m part of the Barńa B squad and this is just a special prize for us playing with the first team squad means we are learning a lot”.

MartĒ’s models in the current set up are Xavi and Iniesta: “I’d like to take the best of each of them and try and find perfection. They are two great players, two of the best in this team”, and of course, two more who came up through the youth teams. 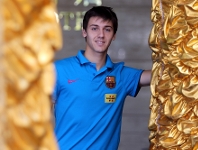 From striker to midfielder

MartĒ Riverola started out at the club as a centre forward and not until 2004/05 did he move back into the middle to become an attacking midfielder. Last season he was second top goalscorer in the U-19 A side with 13 goals.