FC Barcelona and Sevilla CF have reached an agreement for the transfer of Adriano Correia that will see the Brazilian move to Camp Nou for an initial fee of €9.5 million and a conditional €4 million extra.

The deal depends on the utility star passing a medical at Barça and the signing of his contract. Adriano will arrive in Barcelona on Saturday in order to undergo a series of tests. 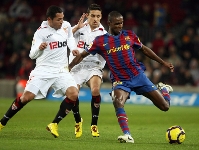 Adriano is set to become the second signing of the summer after David Villa made the switch from Valencia before the World Cup Finals. The 25-year-old has shone during his six seasons at Sevilla as he proved that he can play in a variety of positions.

Able to play in either full-back position Adriano can also push forward and perform on the left or right of midfield and has even proven his worth in the centre. His vision and desire to help out in attack has won him many admirers and made him a regular in a Sevilla side that has enjoyed winning several major honours in the past few seasons.

At Barça next term Adriano will team up once again with former Sevilla colleague Dani Alves. The pair spent four seasons together at the Ramón Sánchez Pizjuán winning the UEFA Cup twice, the Copa del Rey, the Spanish Super Cup and the European Super Cup. 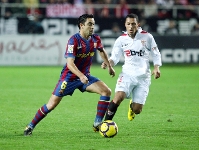 Adriano Correia could meet up with his former Sevilla team-mates very quickly after joining FC Barcelona as the two teams are due to meet in the Spanish Super Cup in mid-August.