FC Barcelona and Manchester United will meet in the 2011 Champions League Final on May 28th at Wembley Stadium – the 11th time the two teams have met in Europe and the 8th game between them in the Champions League. 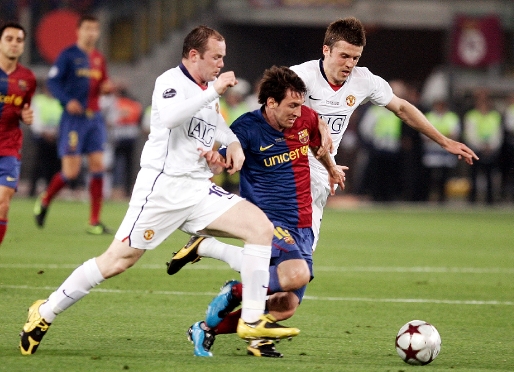 The two Clubs have another game on the horizon after their Wembley date, having previously agreed to play in the World Football Challenge 2011 in Landover, Maryland on July 30th.
After seeing off Real Madrid and Schalke 04 in the semi finals, Josep Guardiola and Alex Ferguson are set to meet again in a Champions League final – and this time it’s at Wembley, an iconic stadium for both clubs, where they both won their first European Cups: Manchester in 1968 and Barēa in 1992.

This year’s final will be a repeat of the 2009 match up in Rome when Barēa beat United 2-0, thanks to goals from Eto’o i Messi to take their third ever European Cup. The game will also be the 11th time the two have met in continental competitions, having played each other 3 times in the Cup Winners Cup and 8 times in the Champions League.

The first game between the two was in the quarter finals of the 1983/84 Cup Winners Cup. Although Barēa won 2-0 in the first leg at the Camp Nou, United turned the tie round in the return leg, winning 3-0 to reach the semi finals.

The two met again in the same competition in the final of the 1990/91 edition in Rotterdam, when United again came out top, beating Barēa 2-1. This was the first European final played between the two, with another to follow in 2009 and this year’s clash at Wembley set to be the third.

Since that night in Rotterdam, the two have only met in Europe’s top competition, the Champions League. In the 1994/95 season, Barēa reached the quarter finals after finishing second in the group stage, ahead of United who were eliminated after drawing 2-2 at Old Trafford and losing 4-0 at the Camp Nou. Barēa didn’t get too much further either, losing to Parķs Saint-Germain in the quarter finals.

The two were again paired in the group stage of the 1998/99 competition, and both at Old Trafford and the Camp Nou, the result was the same – a 3-3 draw. This time it was United who went through to the next round as group runners up, whilst Barēa were eliminated. United went on to lift the trophy after beating Bayern Munich 2-1 at the Camp Nou.

In the 2007/08 season, United denied Barēa a place in the final by beating them 1-0 at Old Trafford after drawing 0-0 in the first leg of the semi-final in Barcelona. Sir Alex Ferguson’s team went on to beat Chelsea in a penalty shootout in the final played in Moscow, to claim their third European Cup win.