Agreement between FC Barcelona and SEIKO

FC Barcelona and SEIKO have signed an agreement by which the Japanese brand is to become FC Barcelona’s Official Time-Keeping Partner and will benefit from marketing and visibility rights for the next three years. This agreement was signed on March 1 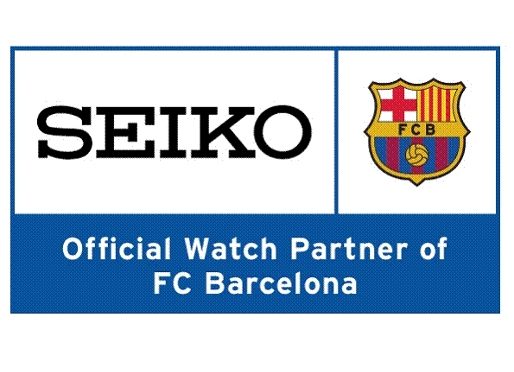 In addition, SEIKO will have the right to promote the partnership in all forms of worldwide communication, and will be presenting the new Sportura collection against the background of FC Barcelona imagery, starting this summer. In fact, the new Sportura collection is central to the SEIKO – FC Barcelona partnership, and the Sportura has been chosen by the Club as the FC Barcelona team watch. This summer, each member of the squad will be presented with his watch, which will carry the club’s crest on the dial.
As a result of this agreement, SEIKO will obtain a number of different rights, such as, for example, branding on the clocks on the home stadium scoreboards, branding on the fourth official’s added time board at La Liga home games and licensing rights for the company’s watches.

Satisfaction of both parties

The Vice President of FC Barcelona’s economic area, Mr. Javier Faus, was delighted to see this agreement signed. “We are delighted with this partnership with such a prestigious and internationally well known brand that has always collaborated so closely with the world of sport. We are convinced that this relationship will further encourage both brands to continue their work for excellence and success."

Meanwhile, the President and CEO of Seiko Watch Corporation, Shinji Hattori was also pleased with the partnership. He said “We are delighted to be appointed as an international partner of FC Barcelona. The history, culture and ambition of the Club are a perfect match with Seiko and we look forward to a successful co-operation in the coming years.”

SEIKO and FC Barcelona share a conviction that excellence comes from in-house development. Much like FC Barcelona’s philosophy of producing local talent at its youth academy, La Masia, SEIKO’s strength as a watchmaker comes from the company’s determination, from the very earliest days, to develop every component and every skill in-house. Both FC Barcelona and SEIKO have manufactured their past success through significant investments in long term internal development and both partners continue to share the belief that this philosophy will continue to deliver world-class results in the coming years.

SEIKO always in touch with sport

SEIKO was founded 130 years ago. In 1881, a 22 year old entrepreneur, Kintaro Hattori, opened a clock repair business in central Tokyo. He soon expanded into importation of clocks from USA and Europe and, in 1892, opened a factory to produce clocks and, in 1895, pocket watches. In 1913, SEIKO’s first wristwatch was marketed.

Sport has always played a major role in the development of SEIKO as a global brand. When SEIKO was selected as the Official Timer of the 1964 Olympic Games, the company built an entire suite of timing equipment, 1,278 devices in all, to serve the event, and the timing was flawless. The world saw that SEIKO was capable of timing the most important and technically demanding sport event on earth. Since then, SEIKO’s timing services have been in constant demand at world-class events in all sports in every corner of the world. Barcelona holds a very special place in the hearts of all SEIKO people because we were appointed to time the 1992 Olympic Games, and for both the city and for SEIKO, the Games were a huge success.

SEIKO leads the world’s watch industry in technological innovation and is the brand that has done the most in recent years to bring new ideas to the market. In the 1980’s SEIKO invented the ‘Kinetic’ watch, a quartz watch that takes its energy from the movement of the wearer and more recently, SEIKO brought true innovation to the luxury watch with its extraordinary Spring Drive mechanism; it is a spring-wound watch that delivers accuracy 10 times greater than that of any other mechanical watches.