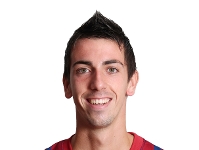 After a successful time on loan at Sabadell (where he played an important role in their promotion winning campaign), Isaac Cuenca López returned to the Club in the summer of 2011. He is normally used as a winger and has a great ability to beat a man and put in a good cross, something he showed well when he joined the first team for their pre-season.