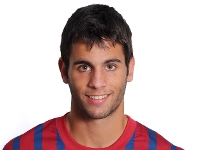 Dalmau is a right back who is also useful going forward, and has also been played as a winger, where he also performs well. He spent all of last season in Juvenil B but his reward was two appearances in the Second Division for Barça B. His two most outstanding virtues are speed and strength.