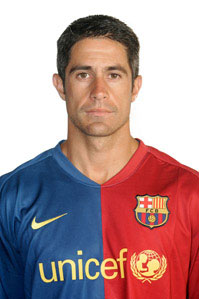 Sylvio Mendes Campos 'Sylvinho', has tried his luck in three of the most important leagues in the world: the Brazilian, English and Spanish. He has always been successful.

His professional career started back in 1994 in Corinthians, one of the clubs of his home town, Sao Paulo. After shining at club level, Mario Zagallo called him up to the national team for his 1997 debut against Russia.

His quality and consistence opened the doors to European football and in 1999 he left Corinthians for the Premier League and Arsenal. Following two seasons at Arsenal, where he quickly became a crowd favourite, he moved to Celta Vigo for the 2001-02 season. There he became an integral part of the team that in the 2003-04 season qualified for the Champions League for the first time in their history.

Sylvinho arrived in Barcelona in the summer of 2004 and since then he has always given sterling performances. In the 2004-05 season, however, he was sidelined for a month with torn knee ligaments. Once he had recovered, Sylvinho played in 21 League games and 3 in the Champions League.

In the 2006-07 campaign the Brazilian continued to share the left back slot with Gio Van Bronckhorst. When the Dutchman left and Éric Abidal arrived, Sylvinho continued to alternate in the position but this time with the Frenchman. He even played on the wing in the 2007-08 season, for instance in the Champions League fixture with Schalke 04.

Sylvinho’s effort and commitment was rewarded with a one-year extension to his contract up to 30 June 2009.

All Brazilian players, almost by genetic default, are touched by magic and graced with an attacking flair. Sylvinho, despite playing at left-back, is no exception to this rule.

His attacking instincts have allowed him to get down the wing throughout his career and he has a culture left-foot when it comes to crossing for the forwards.

As well as his solid defensive ability, the Brazilian is capable of slotting into the midfield. Sylvinho is renowned for his quality, tactical awareness and his concentration levels in every game.