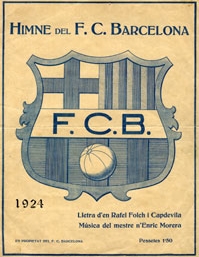 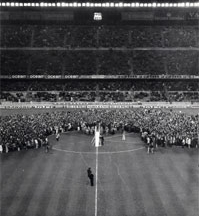 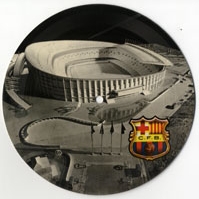 It has become a fully established club tradition that in the build up to games at the Camp Nou, the club anthem, called ‘El Cant del Barça' is played on the stadium loudspeaker system, and all the fans sing along in unison.

It was first performed on November 27, 1974, before the game that marked the end of the 75th anniversary celebrations. A choir of 3,600, conducted by Oriol Martorell, gathered on the pitch for the very first public performance of the new anthem. The words were written by Josep Maria Espinŕs and Jaume Picas, and the music was composed by Manuel Valls. The song quickly grew in popularity. The fans loved the fact that they could clap their hands in time to its catchy rhythm, and the words perfectly depicted the values of supporting Barça, especially the spirit of welcoming outsiders into Catalan society, a spirit that is reflected all the way through the club membership.

However, this is not the only anthem the club has had over the years. The first was unveiled on February 18, 1923, with words by Rafael Folch i Capdevila and music by Enric Morera. It was performed by the Orfeó Gracienc choir, for the first time at the old Les Corts stadium as part of Catalan football tribute to Joan Gamper. In keeping with the grandiloquent mood of the times, the words described the relationship between “sport and the Catalan nation ”.

Later, on occasion of the 50th anniversary, Esteve Calzada wrote the words for a new anthem, which was set to music by Joan Dotras. It was called 'Barcelona, sempre amunt!' (‘Always up with Barcelona!), and despite the political climate of the period, it was written in Catalan.

Josep Badia, in 1957, also used Catalan in the words to a third anthem, 'Himne a l’Estadi' (Anthem for the Stadium’), for the inauguration of the Camp Nou. This was the first time that the word 'Barça' appeared in a club anthem, for which the music was composed by Adolf Cabané.

‘El Cant del Barça' has been so successful that all the previous anthems were soon forgotten, even 'Himne de l’Estadi', which was the official tune in 1974. And it has now become such a part of club tradition that 30m years later, nobody could possibly imagine there to be any need for a new anthem. An anthem was written for the Club Centenary, called 'Cant del Centenari', first performed on September 22, 1998, with words by Ramon Solsona and music by Antoni Ros Marbŕ, but it was made clear from the start that the song was only going to be used within the context of those celebrations.