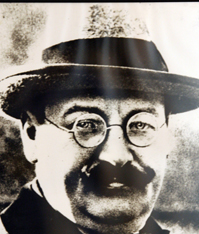 The founder of Futbol Club Barcelona, Joan Gamper, was one of the five children of a well-to-do Swiss family. From a very young age he divided his time between his studies and the practice of several different sports, at which he always excelled.

Gamper was a superb athlete, and also enjoyed other disciplines, such as rugby, swimming and cycling. But his greatest passion was for the game of football. In Zurich, where he lived, he founded Excelsior, and later played for Basle and FC Zurich, another club he helped to form. When he was 18, Gamper had to leave his home country for work reasons and moved to Lyon, where he also played for the local team.

In 1899, Gamper moved to Barcelona, and his uncle Emili Gaissert, who lived in the Catalan capital, persuaded him to take up residence in the city. And so it was that the founder of the Club arrived in Barcelona, where he carried on playing football in the district of Sant Gervasi and eventually decided to form a club. Gamper grouped as many people around him as he could find that had an interest in a sport that was largely unknown to people in this part of the world. And finally, on November 28, 1899, the dream of forming Futbol Club Barcelona became a reality.

Gamper turned down the opportunity of becoming the first club president, and it was not until 1908 that he took over in a desperate attempt to save the club from extinction. His first presidency began on December 2 following a dramatic meeting at the Solé Gymnasium. The previous president, Vicenç Reig, had resigned after just 22 days in the role, and director Francesc Sanz told the meeting the details of the critical situation the club was in, struggling not just on the pitch, but also financially and socially. His speech as good as claimed that the days of Futbol Club Barcelona were over, but following a ghostly silence, a player called Carlos Wallace asked: "But is there nobody who is willing to save the club? If there is anybody, then all the players will back him up." And at that moment, Joan Gamper, who had said nothing until then, stood up and started speaking enthusiastically: " Barcelona cannot die and must not die. If there is nobody who is going to try, then I will assume the responsibility of running the club from now on. I am sure I will be supported by all those people who, in times when football was something strange that people viewed with mistrust, had no doubt about supporting me and seconding me. Right now, I want to forget any grievances or inconsideration received, which may have led me to distance myself from the internal life of the club, to reclaim a place in the fight to revive the club that will involve us all. If anybody wants to second me, let them say so."

The founder’s words gave everybody renewed hope, and from that moment on, Gamper put the full force of his enthusiasm into the club with the single aim of getting it back on its feet. Of the many initiatives he promoted, he sought to win back the members the club had lost, and it was not long before there were more than two hundred.

In a sporting sense, Gamper rebuilt the team, and in 1908-1909 they won the Catalan Championship without losing a game. Another of his challenges was to find Futbol Club Barcelona its own ground, which would eventually be constructed in Carrer Indústria. After 322 days in charge of the club, on October 14, 1909, Gamper stood down as president for work reasons, but stayed on as a member of the board.

On November 17, 1910, during a general assembly, the members asked him if he would consider becoming president again, and so it was that Gamper took charge for a second period, which would last until June 30, 1913. During the 1910-1911 season, the Barça president had to deal with several internal disagreements in relation to the growth of professionalism, and also some highly unfavourable relations with the Spanish Federation.

The following season was not without controversy either, and during one particularly tense members meeting, Gamper was on the point of leaving the club. But things calmed down, and the season ended well with Barça winning the Spanish Championship and the Pyrenees Cup.

The differences with both the Catalan and Spanish Federations reached an all-time low in the 1912-1913 season and Futbol Club Barcelona, unhappy with both organisations, resigned from the two. At the end of the season, Gamper, fed up with so many problems with the Federations, left his position.

But on June 17, 1917, Joan Gamper found himself required at the helm of the club once again. When he took command, he immediately signed Englishman Jack Greenwell, who became the club’s first professional coach. In 1919, the team signed the legendary Zamora and Samitier and on June 19 of the same year, having sorted out so many of the problems plaguing the club, Gamper resigned once again.

But two years later, on July 17, 1921, the founder became president for the fifth time in what would be one of the club’s finest periods. The 1921-22 season went down in club history as FC Barcelona won the Catalan and Spanish Championships, and more importantly on May 22, 1922, Les Corts stadium was opened. The club was financially very sound, and its membership was increasing spectacularly. By the end of the 1922-23 season, Barça had more than ten thousand members, and Gamper, after 742 of the most important days in the club’s history, resigned yet again.

On June 1, 1924, a few months before the Silver Anniversary, the founder took the reigns of the club one last time to resolve a series of tense issues affecting the organisation. Once more, the effect of having Gamper as president proved a success, and the celebrations were sensational. On December 17, 1925, Gamper and his entire board were deposed by the Primo de Rivera dictatorship, which closed Les Corts stadium for six months after the supporters had jeered the Spanish National Anthem before a match.

And so it was that Joan Gamper, who had always used the Catalanised version of his name and who was accustomed to using the language of his adopted country, said goodbye to the presidency of FC Barcelona for the final time after some brilliant periods without which Futbol Club Barcelona would certainly not be what it is today. The father of FC Barcelona committed suicide on July 30, 1930, probably as a result of his business problems, and his funeral was a massive show of public mourning. The club reserved his name as club member number one, and would later name the prestigious Joan Gamper trophy in his honour.