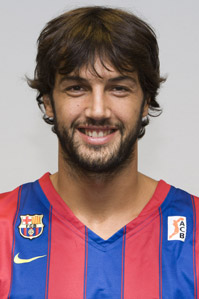 Gianluca Basile joined BarÓa in July 2005 after making a name for himself over seven seasons on the roster of Fortitudo Bologna.

For the Italian National Team his most memorable game was at the Athens Olympics in 2004 against Lithuania, when he scored 31 points (7 out of 11 three-pointers) got his team through to the final against Argentina.

Gianluca Basile started his career in the youth teams of Reggio Emilia and became a professional player in the 1995/96, season, when the team were in the Italian second division. After a year of getting used to the big time, Basile was a key player in the following season's promotion to the top flight with a 68% success rate in two-point shots, he recorded a 12,5 point average. Those stats gradually got even better as he became a figure in the Italian game and in the 1998/98 season he left Reggio Emilia for Fortitudo Bologna, the recent champions of the Italian Cup , where he soon built a reputation as an excellent shooter.

Season 2000/01
The following year Basile made his debut in the Euroleague, though it was Fortitudo's city rivals Kinder who won the competition, beating Tau Vitoria in the final. That same season, Basile established himself as a reference point for the team with a 10 point scoring average in Europe and 12,9 points in the league.

Season 2001/02
The Italian guard continued to impress with a 13 points average in the league and a 40% success rate from the 6,25 line. Basile was lining up with Gregor Fucka and Zoran Savic, with whom he would later team up again at Barca. That season in the Euroleague, Basil’s Skipper team played FC Barcelona in the Top 16, ending up in third spot, thus missing out on the Final Four, behind Barca and Benetton. Basile's stats in Europe were a 12 points average and a 43% success rate in three-pointers.

Season 2002/03
Italian teams dominated the European game and Edney and Marconato at Benetton and Turkcan and Kakiouzis at Montepaschi ensured a double presence in the Final Four in Barcelona, which the hosts won beating Benetton in the final. Skipper again just missed out though Basile returned excellent figures with a 13,8 point average in the 19 games played.

Season 2003/04
During this season, Basile was MVP of the Italian League with an average of 13,4 points per match and a 44% accuracy in both two-point and three-pointers. That year was also the Bologna team's most successful in Europe, beating Montepaschi in the semis of the Final Four, before losing to the Maccabi team of Parker, Burstein and Jasikevicius.

Season 2004/05
In his final year in Italy, Basile again chalked up some fine stats and was named Man of the Match in the Final of the Italian League, which his renamed Climamio team won. Basile had an average of 11,5 points per game, 3,2 rebounds and 2 assists, with 50% accuracy in two-point shots and 32,8% in three-pointers. Although he failed to make the European Final Four, Baso recorded an impeccable 100% in free shots –28 from 28 in the regular season.

Season 2005/06
Gianluca Basile joined Barcelona under the guidance of his one time teammate and technical director in Bologna, Zoran Savic. In his first season at Barca he reached the Final Four after beating Real Madrid in the quarterfinal play offs. In the ACB League he scored an 8,2 point average, with a 48% success rate in two-point shots, stats he improved on in Europe with an 8,7 point per game average and 54% in two-point shots.

Season 2006/07
Baso's success at Barca increased and he reached the final of the ACB League as a key part of the team with stats of 9,7 points, 3 rebounds and a 10,7 evaluation rating

Season 2007/08
The year Navarro left for the NBA, Basile took on even more importance for the team and with 27 minutes average court time, he was the player who figured most for the team during the regular season. The Italian was again a finalist in the ACB with an average of 9,7 points per game in the regular season and 6,6 in the play-offs. His best game was the quarterfinals of the Euroleague against Maccabi Tel Aviv. In the second game, played at the Palau he recorded his best figures at the club, with 34 points, 6 three-pointers, 5 rebounds and a 31 evaluation rating

Season 2008/2009
BarÓa won the ACB League in 2008/09 and the Italian was a key part of Xavi Pascual's team, recording averages of 7,6 points, 1,8 rebounds 39% success rate in three-pointers and 48% in two pointers, together with an evaluation rating of 6,8 per game during the regular season. In the play-off he was the second highest scorer from the 6,25 line behind Juan Carlos Navarro, with a 2,33 three-pointers average in the 9 games played. One of the games in which his contribution proved decisive was the first game of the final of the play-off for the l’ACB against Tau CerÁmica. With just two seconds left, and with Tau leading 80-79 Basile fired home a basket from beyond the 6,25 line to give Barca a key win which they built on to take the tie in the fourth game at the Palau.

In the Euroleague, the Italian played a total of 18 matches averaging 17.17 minutes and 4.1 points per game. After fifteen seasons as a professional, he saw his long-pursued dream of lifting the Euroleague title come true. It took place in Paris and the guard from Ruvo di Puglia scored two three-pointers in the final against Olympiacos, who his team beat handsomely by 86 to 68.

In the semifinal against Lithuania, Basile had scored 31 points, scoring 7 out of his 11 three-pointer attempts that led Italy into the final.

Others
His excellent three point shooting has won him the nickname mandarineri, as these scores are known as mandarins in Italy. He has also been a pioneer of the tiro ignorante, shots with hardly any angle.

He and his wife Nuncia have three children: Alexia, Manuela and Federica, who was born in Barcelona.