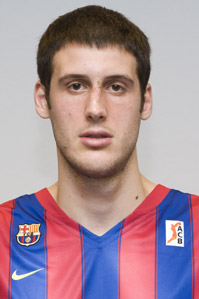 Kosta Perovic joins FC Barcelona as the first recruit for the 2010/11 season.

Perovic was born in the Croatian town of Osijek but is of Serbian nationality. He joins Regal FC Barcelona for the 2010-11 season, signing a deal taking him through to 2013.

Perovic was one of the stars of the Riga Cadet European Championship in 2001. He made his name with the legendary Serbian team Partizan after coming to the fore with Beopetrol, a smaller club from the Serbian capital.

2000-01
He had an unforgettable debut season with the senior team of KK Beopetrol after making his way up through the youth ranks. At the tender age of 15 he played five games in the Swisslion Superlige, averaging almost six points, one rebound, two assists and one steal.

2001-02
He gradually established himself with the seniors and played eleven games. His stats improved and he came to the attention of some of the country’s top teams.

2002-03
At the age of 17 he moved to Partizan Belgrade and in his first season played 22 games and won his first league title. He also made his debut in the Euroleague, playing twelve games.

2003-04
This season he really established himself as a center averaging more than ten points and finishing with some of the best rebound stats. A talented and attack-minded Partizan team won the Swisslion Superlige yet again, in good part thanks to Perovic.

2004-05
He maintained his stats in his third season with Partizan, despite some injury problems, with nearly 15 points per game, and his influence in attack continued to increase. He won his third league title.

2005-06
Fourth season with Partizan, fourth league title. Perovic maintained his stats with 14.7 points per game and notched up his best ever offensive rebound score in the Euroleague (7).

2006-07
His last season with Partizan was possibly the best, achieving the best personal stats of his career so far, especially in the Euroleague. Away to Olympiacos, he obtained a valuation of 33; against Panathinaikos he achieved 5 steals and 4 blocks and against Lottomatica he notched up his best rebound stat (12). His best game was against Cibona Zagreb: 38 minutes on court and 23 points. He left Partizan on a high, having collected five consecutive league winner’s medals.

2007-08
In 2006, Kosta Perovic was drafted nŗ 38 by Golden State but delayed joining the Warriors until 2007. However, it was perhaps too soon to make the big leap to the NBA and he spent more time in the NBDL than in the NBA. He played just seven games with the Warriors and decided to return to Europe.

2008-09
He came to the ACB with Pamesa Valencia and after a difficult settling-in period he ended up playing 32 games in the regular phase of the league and two in the playoffs. He averaged 10 points and proved his rebound powers.

2009-10
His stats improved considerable in his second season with Valencia. In the league, Power Electronics once again qualified for the playoffs but were eliminated in the first round by Regal Barēa. Perovic placed 36 games, 31 in the starting five and was a key element in the team. Meanwhile, he collected his first European title when Valencia won the FIBA Eurocup,

Profile
Since coming to the ACB he has proved his power under the ring and his immense work rate. He’s also one of the tallest players in the competition. No slacker when it comes to throwing from the middle distance – an aspect of his game he’s worked hard on – he’s lethal close to the basket.

He stands out for his attacking qualities, he’s effective close to the basket, uses his height well and is quick on his feet.